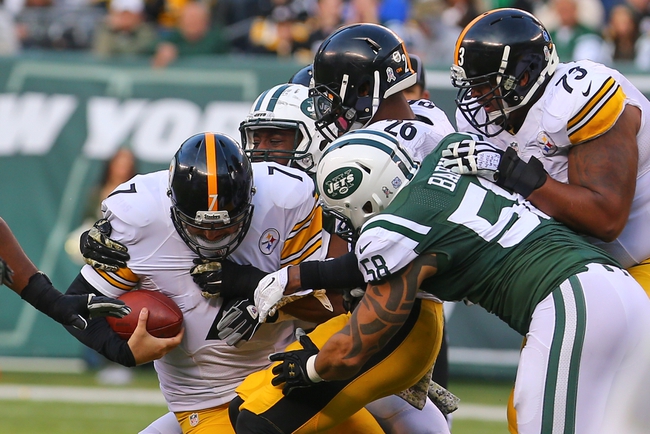 On Sunday, October 9 at Heinz Field, the NFL is bringing us a Week 5 AFC clash as the New York Jets visit the Pittsburgh Steelers.

The Jets come into this game flailing at 1-3, losing their last two games. New York’s most recent defeat came this past Sunday at the hands of the Seahawks 27-17. The Jets defense gave up three touchdowns to QB Russell Wilson, and New York QB Ryan Fitzpatrick coughed up three interceptions. Throughout the game, the Jets couldn’t get much of a running game going, as RB Matt Forte could muster just 27 yards on 14 carries. WR Brandon Marshall was the only real statistical gem, with his four receptions for 89 yards and a TD for New York.

So far this year, Fitzpatrick has given the Jets an 86-of-154 line for 1012 yards and an ugly 4:10 TD:INT ratio. Forte has 288 rush yards and three TDs on 81 attempts, while Marshall leads the way in receiving for New York with 16 receptions, 249 yards and one score.

Things are looking much better these days for the Steelers, who enter Week 5 at 3-1 so far. Pittsburgh’s latest victory came against the Chiefs, dismantling KC 43-14. The Steelers had a 36-0 lead going into the fourth quarter here. QB Ben Roethlisberger gave Pittsburgh a great line with 22-of-27 for 300 yards and five touchdowns, while Le’Veon Bell returned to carry 18 times for 144 yards on the ground. WR Sammie Coates was the Steelers’ leader in receiving with six grabs for 79 yards.

It’s been a solid statistical year for Roethlisberger in Pittsburgh, as he’s sitting on 1116 yards and a 11:4 TD:INT mark. DeAngelo Williams still leads the Steelers with 70 rush attempts for 265 yards and three scores, while Antonio Brown leads the receivers on 28 catches for 369 yards and four TDs.

The Steelers and the Jets are two teams headed in opposite directions. Excluding a hiccup against the Eagles, Pittsburgh has outscored opponents 105-46, and with Bell back in the lineup they can score in several different ways. As for the Jets, Fitzpatrick has a whopping nine interceptions in just his last two games, and the defense has been getting burned on big pass plays at times so inopportune you’d think they were planned that way. The only thing New York can do is stop the run, and I think they’ll do that here. Aside from that, it’ll be a field day for Roethlisberger and his receiving corps. I’ll take Pittsburgh to cover easily.