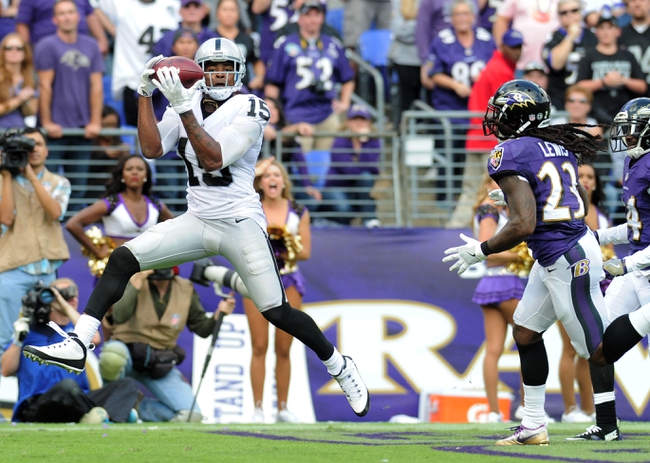 The San Diego Chargers make the drive up I-5 to take on the Oakland Raiders in a week 5 AFC West matchup.

The San Diego Chargers allowed a pair of late touchdowns to fall to 1-3, losing to the New Orleans Saints by a score of 35-34, the same score ironically that the Raiders beat these same Saints by in week 1. Philip Rivers connected on 28 of his 43 pass attempts for 321 yards and a pair of touchdowns, however Rivers also tossed an interception to New Orleans defensive back B.W. Webb. Melvin Gordon continued to see the majority of the workload out of the Chargers backfield, however Gordon was only able to muster up 36 yards on 19 carries against a defense that was near the bottom in defending the run through the first 3 weeks of the regular season, however Gordon did make up for it with a pair of touchdowns on the afternoon. Dontrelle Inman had his breakout game as a member of the Chargers, leading San Diego with 7 receptions for 120 yards and a touchdown. It’s not often you hold the Saints to 275 yards of total offense and end up on the losing end, but that’s exactly what happened to the Chargers as those late touchdowns were their downfall. With that said, the Chargers had some bright spots on the defensive side of the ball, with a pair of team sacks from Melvin Ingram and Jerry Attaochu and a pair of interceptions from Adrian Phillips and Craig Mager to give the Chargers faithful something to smile about heading into their divisional matchup in week 5.

The Oakland Raiders improved to 3-1 with a narrow 28-27 victory over the Baltimore Ravens in week 4. Derek Carr threw for 4 touchdowns and 199 yards while completing 25 of his 35 passes on the day. DeAndre Washington led the Raiders with 30 yards on 5 carries, but that should be taken with a grain of salt as one of those carries accounted for 28 of the 30 yards. LaTavius Murray got the highest amount of work, carrying the ball 8 times for a measly 19 yards. Michael Crabtree did a number on the Ravens, hauling in 7 passes for 88 yards and 3 touchdowns while Amari Cooper caught 5 passes for 48 yards of his own. Defensively, it was business as usual for the Raiders who allowed over 400 yards of total offense for the third time this season. The Raiders did however make use of a pair of sacks from Khalil Mack and Bruce Irvin and a pair of forced fumbles courtesy of Cory James and the aforementioned Irvin to keep the Ravens close enough to steal the victory at the end of the game.

Alright, San Diego probably doesn’t deserve to be 1-3 after how they’ve played the last couple of weeks, losing by a combined 5 points, but you guys should know by now that I’m high on this Oakland team as they look like they’ve finally figured it out and are ready to make a push for the playoffs this year. San Diego may be the more desperate team, but I’m going to side with the Raiders who are the better team right now.

Lay the points with Oakland.