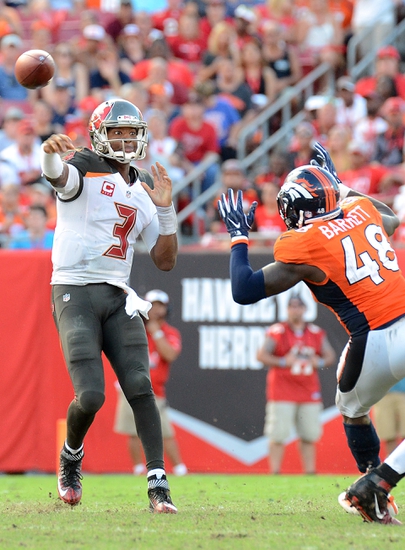 The Carolina Panthers host the Tampa Bay Buccaneers under the bright lights of Monday Night Football to close out week 5 of the NFL regular season.

The Tampa Bay Buccaneers fell to 1-3 with a 27-7 defeat at the hands of the visiting Denver Broncos. Jameis Winston couldn't get anything going against the stifling Broncos defense, completing only 17 of his 35 pass attempts for 179 yards and a pair of interceptions to Denver defensive back Aqib Talib. Charles Sims led the Bucs out of the backfield, logging 28 yards on 15 carries. Cameron Brate once again proved to be a serviceable replacement for the recently-released Austin Seferian-Jenkins, leading the team with 5 receptions for 67 yards while Mike Evans did his best to follow suit, logging 5 catches of his own for 59 yards. Defensively the Bucs held the Broncos to 307 yards of total offence while logging 4 sacks including 3 on Denver starting QB Trevor Siemian who was forced from the game due to an injury to his non-throwing shoulder.

The Carolina Panthers also fell to 1-3 with a 48-33 loss to the Atlanta Falcons. The big story from the game was starting quarterback Cam Newton who left the game due to a concussion. Before he left, Newton completed 14 of his 25 pass attempts for 165 yards and a touchdown before making way for backup Derek Anderson who logged 172 yards of his own to go along with 2 touchdowns and a pair of interceptions on 17 of 23 passing. Newton also led the Panthers in rushing in his limited action, racking up 30 yards on 5 carries while the other 3 Carolina running backs combined for 19 yards on 10 carries. Fozzy Whittaker led the Panthers with 9 receptions for 86 yards while Greg Olsen contributed 6 receptions for 76 yards of his own and a touchdown. Defensively, the Panthers once-stout defensive unit allowed Atlanta to rack up almost 600 yards of total offence, including 503 yards through the air for Matt Ryan. The Carolina secondary couldn't figure out Julio Jones, who had the biggest game of the 2016 season to date, hauling in 12 passes for 300 yards and a touchdown. The only bright spots for the Panthers came in the form of an interception of the aforementioned Matt Ryan by safety Kurt Coleman and a total of 3 team sacks courtesy of Luke Kuechly, Kawann Short and Kyle Love.

If you asked me at the beginning of the season which of these teams would be 1-3  I would've for sure said the Bucs. No way would I have thought the defending NFC champion would be there as well. However the Panthers just got torched by the Falcons and if there's no Cam Newton available, I don't like the Panthers chances against a young and hungry Tampa Bay squad.

Give me the Bucs and the points.

The pick in this article is the opinion of the writer, not a Sports Chat Place site consensus.
Previous Pick
Calgary Stampeders vs. Toronto Argonauts CFL Pick, Odds, Prediction - 10/10/16
Next Pick
Free NFL Picks, Previews, Odds, Schedule, and TV Info for Every Game for Week 5 2016