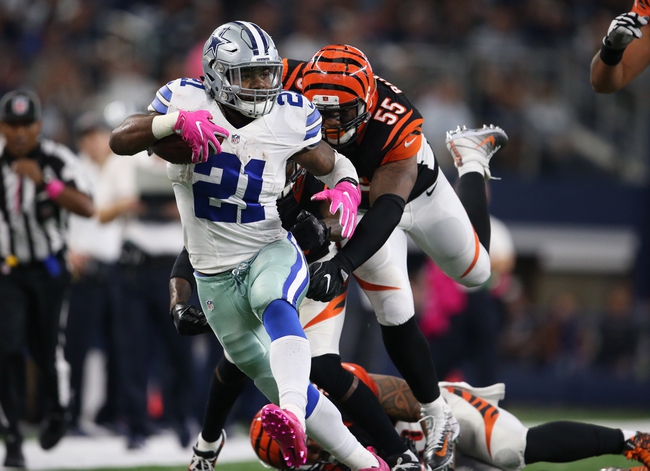 A marquee matchup takes place at Lambeau Field in week 6 as the Green Bay Packers host the Dallas Cowboys.

The Dallas Cowboys improved to 4-1 with a 28-14 victory over the Cincinnati Bengals. Dak Prescott completed 18 of his 24 pass attempts for 227 yards and a touchdown. Ezekiel Elliott had a 3rd consecutive monster performance, and possibly his best to date, racking up 134 yards and a pair of touchdowns on just 15 carries. Elliott also added 3 receptions for 37 yards, however it was Terrance Williams who led the Cowboys with 5 receptions for 70 yards. Cole Beasley also hauled in 4 balls for 53 yards and was on the receiving end of Prescott's lone touchdown. Defensively, the 14 Bengals points were the lowest total against any of Dallas' first 5 games this season. The Cowboys managed to hold down Bengals star receiver A.J. Green, limiting him to 4 receptions for 50 yards. The performance was highlighted by 3 sacks from Terrell McClain, Benson Mayowa and Cedric Thornton.

The Green Bay Packers improved to 3-1 with a 23-16 win over the New York Giants on Sunday Night Football. Aaron Rodgers threw for 259 yards on 23 of 45 passing with a pair of touchdowns that were negated on his stat line by a pair of interceptions. Eddie Lacy made the most of his share in the Packers backfield, racking up 81 yards on 11 carries while James Starks used his 12 touches to log 33 yards. Randall Cobb led the Packers with 9 receptions for 108 yards, both team-highs. Davante Adams hauled in 5 passes for 85 yards of his own and a touchdown while Jordy Nelson also caught 4 balls for 38 yards and a touchdown. Defensively, the Packers suffocated the Giants, holding New York to 221 yards of total offense while sacking Giants QB Eli Manning 4 times, courtesy of Micah Hyde, Nick Perry, Kyler Fackrell and Clay Matthews.

This should be a great game between two solid teams. However we are getting points with a Dallas squad that has caught fire winning 4 straight. Green Bay may be 3-1 but they haven't looked like it at certain points this season. Sure Lambeau is one of, if not the hardest place to win on the road, but I can't turn down the points here.

Give me Dallas and the points.