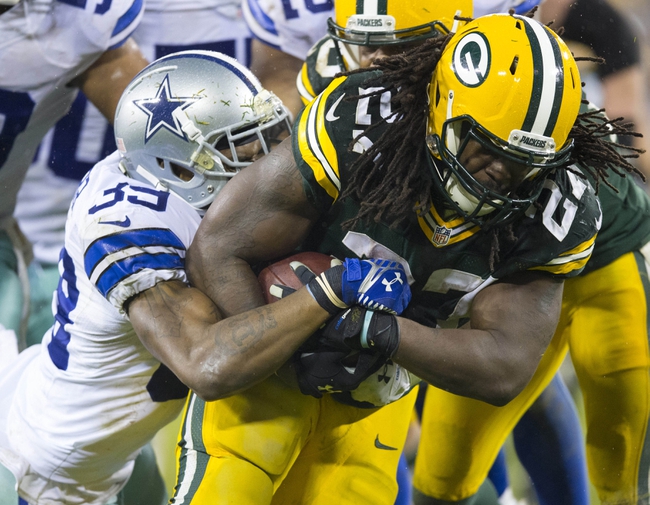 Headed our way on Sunday, October 16 from historic Lambeau Field, we’ve got a Week 6 NFC matchup on the NFL plate as the Dallas Cowboys visit the Green Bay Packers.

Dallas cruises into this game with a nice 4-1 record, winning four straight after dropping their opener. The Cowboys’ latest win came in Week 5 against the Bengals 28-14, and Dallas QB Dak Prescott had another strong game with an 18-of-24 line for 227 yards and a TD. Ezekiel Elliott led the Cowboys on the ground with 15 carries for 134 yards and two TDs, while Terrance Williams hauled in five passes for 70 yards to lead the team.

During the Dallas season so far, Prescott has managed to go 107-of-155 for 1239 yards, four TDs and no interceptions. Elliott is the high RB with 109 attempts for 546 yards and five scores, while Cole Beasley leads the Cowboys with 27 receptions for 332 yards and one score.

Over on the Packers’ side, they’re coming into this game with a solid 3-1 mark following a Week 5 win over the Giants 23-16. In that one, Green Bay overcame a sketchy offensive effort marred by drops and untimely penalties. Packers QB Aaron Rodgers finished the game on a 23-of-45 mark for 259 yards, two TDs and two interceptions. Eddie Lacy powered a strong Green Bay rushing attack (before he got hurt in the second half) with 11 carries for 81 yards, and Randall Cobb led the receivers on nine grabs for 108 yards.

So far this season for Green Bay, Rodgers has put up a 78-of-139 line for 876 yards and nine touchdowns, and Lacy is the Packers’ leading rusher on 54 attempts for 295 yards. Jordy Nelson is Green Bay’s receiving leader on 21 receptions for 244 yards and five touchdowns.

No one anticipated the Cowboys would be 4-1 at this point, but here they are. Dallas has thrived on a great running game powered by a stout offensive line, and the Packers defense (which is very good in itself), will have their hands full stacking the box to stop the rush. That will leave Prescott to succeed with his arm, and the short, high-percentage passes aren’t going to cut it for the Cowboys. I see Rodgers controlling this game with a good mix of run and pass, and Green Bay coming out on top by a pretty wide margin.