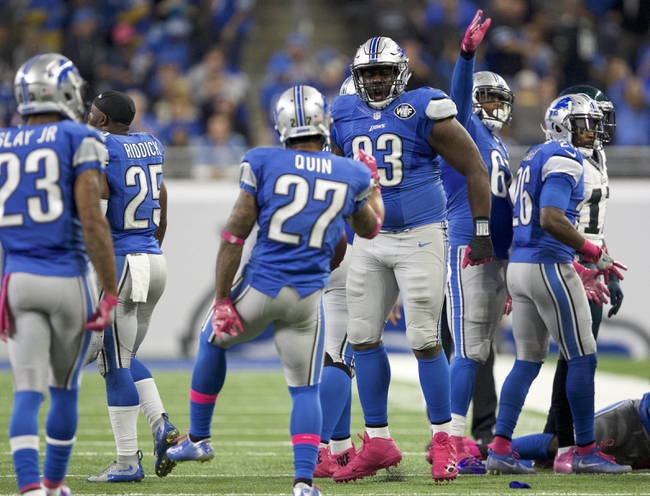 The Los Angeles Rams travel to Ford Field to take on the Detroit Lions in week 6 NFL action.

The Los Angeles Rams fell to 3-2 with a 30-19 defeat at the hands of the Buffalo Bills. Case Keenum completed 21 of 31 pass attempts for 271 yards and a pair of interceptions on the day. Todd Gurley racked up 72 yards and a touchdown on 23 carries, with the touchdown being the only scoring the Rams offense would put up in week 5. Kenny Britt led the Rams with 75 yards on 5 receptions while Tavon Austin was not far behind with a team leading 7 receptions for 59 yards. L.A. allowed only 305 yards of total offense to the Bills but the 30 points allowed is the second highest total against the Rams this season, where the Rams fell to 1-2 this season when allowing 28 or more points. The only highlight for the Rams to write home about came in the form of a sack courtesy of Ethan Westbrooks on Buffalo QB Tyrod Taylor.

The Detroit Lions improved to 2-3 with a narrow 24-23 victory over the Eagles, handing Philadelphia their first loss of the season. Matthew Stafford connected on 19 of 25 passing, for 190 yards and 3 touchdowns. Theo Riddick led the Lions in rushing with his 11 carries for 49 yards, however he also managed to contribute in a major way, catching 6 balls out of the backfield for 33 yards and a pair of touchdowns. Anquan Bolton led the Lions with a team-high 48 yards on 4 receptions while Marvin Jones caught 4 passes of his own for 37 yards and a touchdown. The Lions had a pretty solid day offensively, holding the Eagles to their fewest points in any game this season. Detroit also logged a trio of sacks from Devin Taylor, A'Shawn Robinson and Armonty Bryant to go along with Darius Slay's pick off of Philly QB Carson Wentz, the first of Wentz's career.

This is a hard one to gauge because both teams have been up and down to this point. However Detroit did just dethrone a very good Eagles team and like most teams play their best ball at home.

Not a huge fan of the pick, but I'll side with the Lions at home.