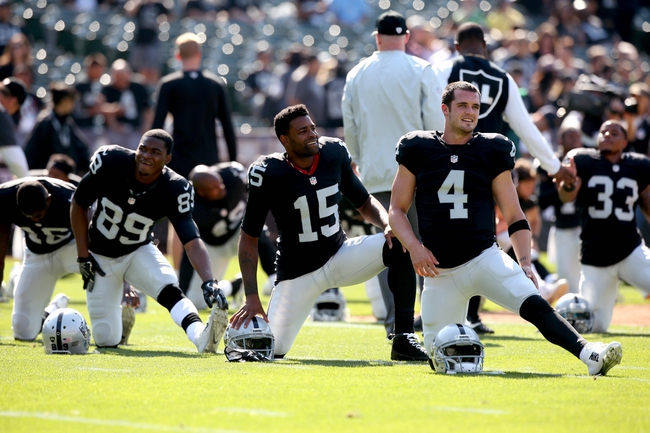 The Kansas City Chiefs and Oakland Raiders meet Sunday in a critical AFC West NFL showdown at the Oakland Coliseum.

The Oakland Raiders look to stay in the AFC West hunt by winning their fourth straight game. The Oakland Raiders have won four games this season by a combined 12 points. Derek Carr is completing 66.8 percent of his passes for 1,383 yards, 11 touchdowns and two interceptions. Carr has two or more touchdown passes in seven of his last 11 games. Amari Cooper and Michael Crabtree have combined for 811 receiving yards and six touchdowns while Clive Walford has 13 receptions. The Oakland Raiders ground game is averaging 119.2 yards per contest, and Jalen Richard leads the way with 175 yards and one touchdown. Defensively, Oakland is allowing 27.4 points and 452.6 yards per game. Reggie Nelson leads the Oakland Raiders with 37 tackles, Stacy McGee has 2.5 sacks and Karl Joseph has one interception.

The Chiefs do have an advantage coming off of a bye, but that's still not enough to make me fade the Raiders at home. The young Oakland Raiders are starting to find their groove with three straight victories and you can see the confidence building. Not to mention the Kansas City Chiefs have been outscored 26-62 in their two road games this season. The home team has also won five of the last seven meetings between the Raiders and Chiefs. In a toss-up game line wise, backing the Raiders at home is one of the easier bets in week 6.

The Kansas City Chiefs just don't look like the same team from last season and running into a hot, confident team at the moment.

The pick in this article is the opinion of the writer, not a Sports Chat Place site consensus.
Previous Pick
Montreal Alouettes vs. Calgary Stampeders CFL Pick, Odds, Prediction - 10/15/16
Next Pick
Seattle Seahawks vs. Atlanta Falcons - 10/16/16 NFL Pick, Odds, and Prediction