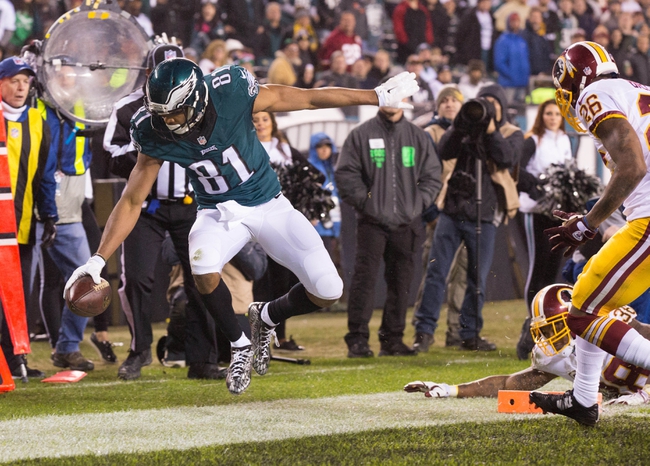 The Washington Redskins and the Philadelphia Eagles face off on Sunday at FedEx Field in a week 6 NFL NFC East battle.

After an 0-2 start the Washington Redskins have now won 3 games in a row and they sit at 3-2 for the year. The Redskins offense is averaging 23 points and 366 yards per game and they are plus 2 in turnover margin. Washington QB Kirk Cousins has completed 67.2 percent of his passes with 7 touchdowns and 5 interceptions. Matt Jones is the Redskins top rusher with 298 yards and 2 touchdowns and Jordan Reed leads in receptions with 33 catches and 2 touchdowns and Pierre Garcon has 22 catches and a touchdown. The Redskins defense is allowing 24.4 points and 392 yards per game with 4 interceptions, 9 fumble recoveries, and 11 sacks. Will Compton leads the Skins with 46 tackles, Mason Foster has 41 tackles, and Trent Murphy has 4.5 sacks. The Redskins have been resilient but this is a huge game in their big picture this season.

The Philadelphia Eagles are 3-1 this season and they are coming off of their first loss of the year falling in Detroit to the Lions. The Eagles offense is averaging 28.8 points and 363.8 yards per game and they are plus 5 in turnover ratio. Philadelphia rookie QB Carson Wentz has completed 67.4 percent of his passes with 7 touchdowns and 1 interception. Ryan Mathews is the Eagles top rusher with 146 yards and 3 touchdowns and Jordan Matthews has 19 receptions and 2 touchdowns. The Eagles defense is allowing 12.8 points and 266.8 yards per game with 3 interceptions, 4 fumble recoveries, and 14 sacks. Rodney McLeod leads the Philly defense with 23 tackles, Jalen Mills has 18 tackles, and Fletcher Cox has 4 sacks. The Eagles look to be an improved team but I am still not 100 percent sold that Wentz can keep it going for an entire season.

I am not sold on the Eagles and I am going to fade them here. Washington is playing a physical style and at home against a rookie QB I like their chances and I doubt we will need the points.