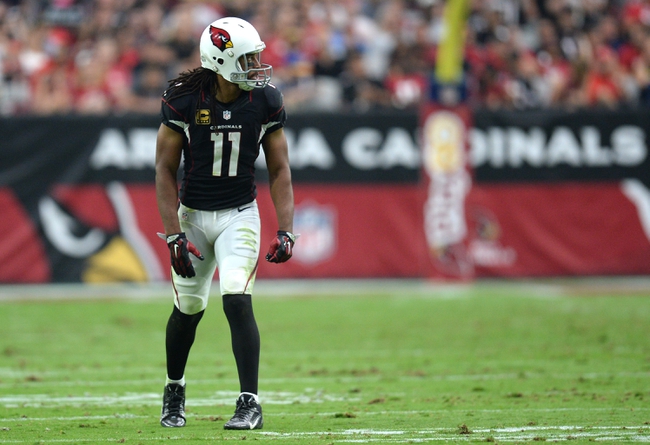 Headed our way in the Week 6 edition of “Monday Night Football,” the NFL is bringing us a matchup between the New York Jets and the Arizona Cardinals from University of Phoenix Stadium.

New York comes into this game skidding at 1-4 on the year, with their latest defeat coming at the hands of the Steelers 31-13 this past Sunday. The Jets cut the lead to 14-13 at the half, but did nothing in the third and fourth quarters, giving up 17 unanswered points. New York QB Ryan Fitzpatrick finished the game 25-of-38 for 255 yards and one TD, while RB Matt Forte had a rough day on the ground with 12 carries for 53 yards. Brandon Marshall had a couple of big drops in the game, but finished with eight receptions for 114 yards and a TD to lead the Jets in receiving.

On the season so far, Fitzpatrick is 111-for-192 with 1267 yards, five touchdowns and 10 interceptions for New York. Forte is the Jets’ leading rusher with 93 attempts for 341 yards and three scores, while Marshall has put up 24 receptions for 363 yards and two touchdowns.

As for Arizona, they’re sitting at 2-3 and well-rested after a game last Thursday night against the 49ers. The Cardinals took that one 33-21 thanks to 17 points off three turnovers. Arizona QB Drew Stanton (filling in for an injured Carson Palmer) put up an 11-for-28 line for 124 yards and two touchdowns, while David Johnson led the way in the ground game with 27 carries for 157 yards and two scores. Larry Fitzgerald was the Cardinals’ leading receiver on six catches for 81 yards and two touchdowns of his own.

Palmer still leads the Cardinals in passing, going 90-of-153 for 1150 yards and a 6:5 TD:INT ratio. Johnson is Arizona’s rushing leader, posting 91 attempts for 457 yards and five scores, while Fitzgerald has managed 31 receptions for 361 yards and five TDs.

It’s looking like another lost season for the Jets, as they’ve found new and exciting ways to lose in almost every game. New York has scored more than 22 points just once this season, and has allowed at least 23 points in each week. The Jets secondary is leakier than a broken dam, and a couple of well-timed big plays from Palmer (who is looking like he’ll be able to play) to Fitzgerald and the game will be out of reach for New York’s offense. I’ll take the Cardinals to cover here handily.

The pick in this article is the opinion of the writer, not a Sports Chat Place site consensus.
Previous Pick
Buffalo Bills vs. San Francisco 49ers - 10/16/16 NFL Pick, Odds, and Prediction
Next Pick
Free NFL Picks, Previews, Odds, Schedule, and TV Info for Every Game for Week 6 2016