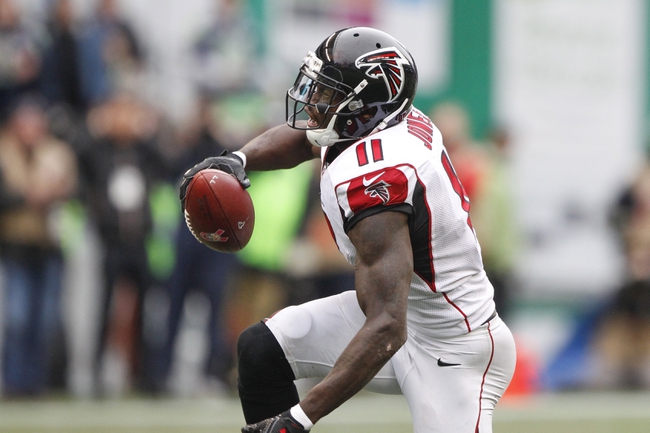 The Atlanta Falcons and the San Diego Chargers face off on Sunday in Atlanta in week 7 NFL action.

The Atlanta Falcons are coming off of a tough and controversial loss to the Seattle Seahawks but they get back home in first place in the NFC South as they sit at 4-2. The Falcons offense is the best in the NFL averaging 33.2 points and 441.5 yards per game and they are plus 1 in turnover ratio. Atlanta QB Matt Ryan has completed 68.1 percent of his passes with 15 touchdowns and 3 interceptions. Devonta Freeman is the Flacons top rusher with 450 yards and 2 touchdowns and Julio Jones is the top receiver with 31 catches and 4 touchdowns and Mohamed Sanu has 21 catches and 2 touchdowns. The Falcons defense is allowing 27.7 points and 379.5 yards per game with 5 interceptions, 6 fumble recoveries, and 11 sacks. Kemal Ishmael is the Falcons top tackler with 48, Deion Jones has 36 tackles, and Keanu Neal has 31 tackles. The Falcons are looking like one of the top teams in the NFL in the early going but their defense will need to improve if they hope to make it deep in the playoffs.

The San Diego Chargers are 2-4 this season and are coming off of a win over the Denver Broncos that ended a series of losses where they lost games they appeared to have in hand late. The Chargers offense is averaging 28.8 points and 355.2 yards per game with a minus 2 turnover ratio. San Diego QB Phillip Rivers has completed 67.2 percent of his passes with 12 touchdowns and 3 interceptions. Melvin Gordon leads the Chargers rushing attack with 393 yards and 6 touchdowns and Travis Benjamin is the top receiver with 31 catches and 2 touchdowns while Rivers is going more to Hunter Henry who has 19 catches and 3 touchdowns. The Chargers defense is allowing 25.8 points and 363.2 yards per game with 7 interceptions, 5 fumble recoveries, and 14 sacks. Jatavis Brown is the Chargers top tackler with 42, Casey Heyward has 29 tackles, and Denzel Perryman has 25 tackles. The Chargers could easily be 4-2 or 5-1 but they have just had trouble closing games out.

The Falcons have been playing well and they are home but the Chargers is where all of the value seems to be here. San Diego has played everyone tough and I see them doing the same here and they get a cover though they might not get an outright win.

The pick in this article is the opinion of the writer, not a Sports Chat Place site consensus.
Previous Pick
Edmonton Eskimos vs. BC Lions CFL Pick, Odds, Prediction - 10/22/16
Next Pick
Pittsburgh Steelers vs. New England Patriots - 10/23/16 NFL Pick, Odds, and Prediction