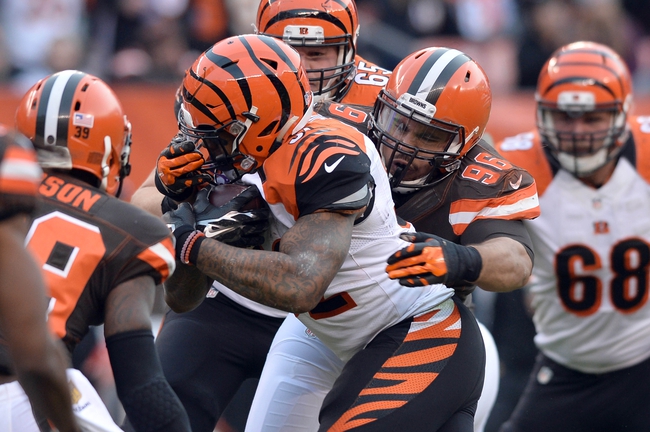 The Cincinnati Bengals and the Cleveland Browns face off on Sunday at Paul Brown Stadium in a week 7 NFL AFC North rivalry game.

The Cincinnati Bengals are a disappointing 2-4 this season and they are coming off of a loss at new England against the Patriots last Sunday. The Bengals offense is averaging 18.2 points and 364.8 yards per game with a plus 2 turnover ratio. Cincinnati QB Andy Dalton has completed 67.4 percent of his passes with 6 touchdowns and 2 interceptions and he has rushed for a touchdown. Jeremy Hill is the Bengals top rusher but he is averaging just 3.6 yards per carry and he has 3 touchdowns and Giovanni Bernard has 167 rushing yards and 29 receptions while A.J. Green leads the team in receptions with 42. The Cincinnati defense is allowing 24.2 points and 355 yards per game with 4 interceptions, 4 fumble recoveries, and 13 sacks. Karlos Dansby leads the Bengals defense with 37 tackles, Shawn Williams has 34 tackles, and Carlos Dunlap has 4 sacks. The Bengals have the longest run of making the playoffs of any team in the NFL but they will need to turn things around to keep that streak alive.

The Cleveland Browns are the last of the winless teams in the NFL this season and they sit at 0-6 thus far. The Browns offense is averaging 18.8 points and 348 yards per game and they are minus 1 in turnover ratio. Cody Kessler is one of 5 QB’s Cleveland has used so far this season and he has completed 65.6 percent of his passes with 4 touchdowns and 1 interception. Isaiah Crowell leads the Browns in rushing with 432 yards and 3 touchdowns and Terrelle Pryor is the top receiver with 33 catches and 3 touchdowns. The Cleveland defense has allowed 29.3 points and 4-3.3 yards per game with 6 interceptions, 2 fumble recoveries, and 9 sacks. Chris Kirksey leads the Browns defense with 50 tackles, Demario Davis has 42 tackles, and Jordan Poyer has 39 tackles. The Browns defense appears to be letting the team down and just not getting any pressure on the QB.

This seems like a ton of points but the Bengals continue to get healthier and the Browns defense just isn’t good enough to take advantage of any of the Bengals offensive deficiencies so look for the Bengals to just pile it on.