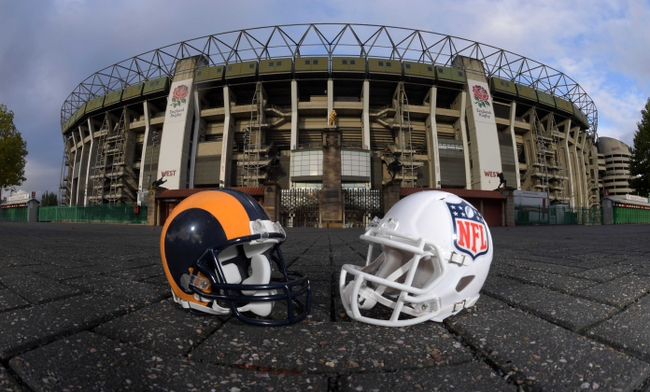 The New York Giants and Los Angeles Rams take a trip across the pond to play a NFL game in Lodon at Twickenham Stadium on the NFL Network.

The New York Giants need a big victory to get a game above a .500 record and stay in the competitive NFC East race. The New York Giants have lost four of their last six road games, even though this obviously won’t be a true road game. Eli Manning is completing 64.8 percent of his passes for 1,788 yards, eight touchdowns and six interceptions. Manning has two or more touchdown passes in five of his last 10 games. Odell Beckham Jr. and Sterling Shepard have combined for 823 receiving yards and five touchdowns while Victor Cruz has 19 receptions. The New York Giants ground game is averaging 76 yards per contest, and Shane Vereen leads the way with 147 yards and one touchdown. Defensively, New York is allowing 21.8 points and 363.7 yards per game. Jonathan Casillas leads the New York Giants with 52 tackles, Landon Collins has two sacks and Janoris Jenkins has two interceptions.

The Los Angeles Rams hope to get back on track and snap a string of back-to-back losses while getting a game above a .500 record. The Los Angeles Rams have played four road games already and some would consider a trip to London a road game as well. Case Keenum is completing 62.5 percent of his passes for 1,417 yards, seven touchdowns and six interceptions. Keenum has two or more touchdown passes in four of his last four games. Kenny Britt and Brian Quick have combined for 757 receiving yards and five touchdowns while Tavon Austin has 26 receptions. The Los Angeles Rams ground game is averaging 80.8 yards per contest, and Todd Gurley leads the way with 346 yards and three touchdowns. Defensively, Los Angeles is allowing 22.8 points and 361.8 yards per game. Alec Ogletree leads the Los Angeles Rams with 50 tackles, Aaron Donald has three sacks and Mark Barron has two interceptions.

It looks like Beckham is back on track and that's when the New York Giants are at their best, as it rubs off on the entire offense and this team puts up points in a hurry. The Rams also look to be coming back down to earth after back-to-back losses and giving up 30-plus points in both games. I always hate capping games that take place in London because the trip and everything that comes with it can throw teams off and usually result in weird results. However, the Giants are the better and more talented team than the Rams.

I have to side with the New York Giants and the small line.