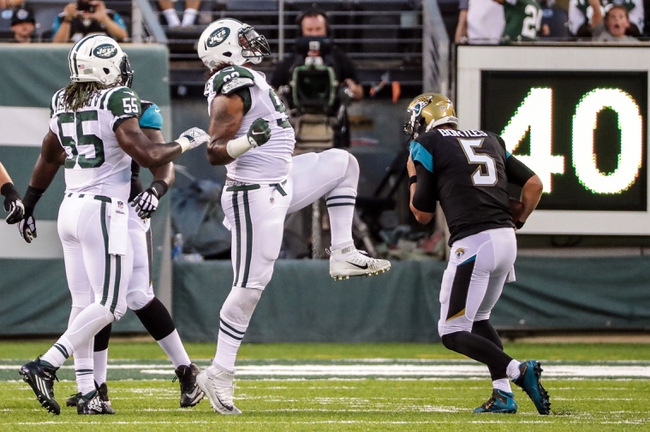 The New York Jets and the Baltimore Ravens face off on Sunday in Week 7 NFL action.

The New York Jets are having a rough go of it this season as they sit at 1-5 and they are in last place in the AFC East. The Jets offense is last in the NFL in points per game at 15.8 and they are gaining 331.5 yards per game but they are an atrocious minus 11 in turnover ratio. New York QB Ryan Fitzpatrick has completed 57 percent of his passes with 5 touchdowns and 11 interceptions butGeno Smith gets the start in this one and he has looked less than impressive. Matt Forte anchors the Jets rushing attack with 3.5 yards per carry and Quincy Enunwa is the leading receiver with 30 catches and a touchdown and Brandon Marshall has 27 catches and 2 touchdowns. The Jets defense is allowing 27.3 points and 375.5 yards per game with 2 interceptions, 5 fumble recoveries, and 12 sacks. Darron Lee leads the Jets with 30 tackles, Calvin Pryor has 26 tackles, and Leonard Williams has 5 sacks. The Jets look to be a mess and might be solving their QB issues by drafting very high in next year’s NFL Draft.

The Baltimore Ravens are 3-3 this season and they have hit the skids losing their last 3 games. The Ravens offense is averaging 19.5 points and 347 yards per game with a plus 3 turnover ratio. Baltimore QB Joe Flacco has completed 62.1 percent of his passes with 5 touchdowns and 4 interceptions and he has rushed for 2 touchdowns. Terrance West is the Ravens top rusher with 414 yards and 3 touchdowns and Dennis Pitta is the top receiver with 34 catches and Steve Smith has 27 catches and 1 touchdown. The Ravens defense is allowing 19.2 points and 294.8 yards per game with 8 interceptions, 4 fumble recoveries and 11 sacks. Zach Orr is Baltimore’s top tackler with 51, C.J. Mosely has 29 tackles, and Eric Weddle has 27 tackles. Terrell Suggs has 5 sacks but he is doubtful for this one as he has a torn bicep.

The Jets look awful and they are coming off of a short week and while it is back-to-back road games for the Ravens oddly enough they are playing in the same stadium the past two weeks. I don’t love the way the Ravens are playing but they are the better team at this point.