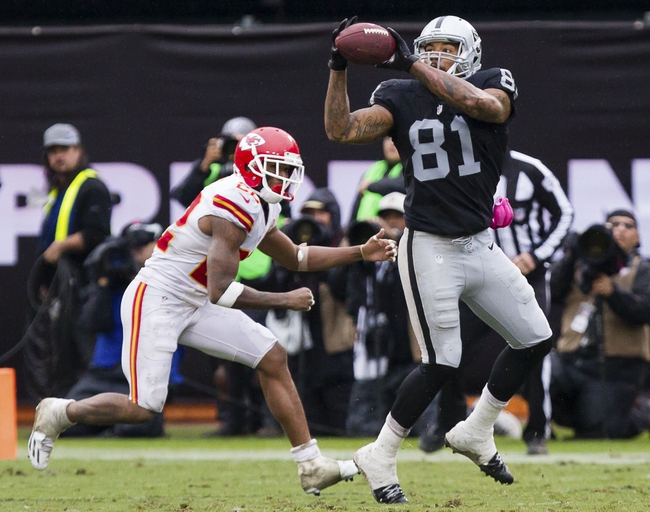 The Oakland Raiders make the trip cross-country to take on the Jacksonville Jaguars in week 7 NFL action.

The Oakland Raiders fell to 4-2 following a 26-10 defeat at the hands of the Kansas City Chiefs. Derek Carr completed 22 of his 34 passes for 225 yards and a touchdown that was canceled out by an interception while being sacked twice on the day. DeAndre Washington got the bulk of the carries for the Raiders, taking his 10 rushes and turning them into 49 yards. Amari Cooper once again showed why he was worth a 4th overall pick in last year’s draft, catching 10 passes for 129 yards while the next leading receiver turning out to be Seth Roberts, who caught 3 passes for 29 yards. Defensively, the Raiders allowed 400 yards of total offense for the 5th time in 6 games this season (the other game was 393 so take that with a grain of salt). Oakland just didn’t seem to have an answer for the Chiefs offense as they allowed QB Alex Smith to complete all but 3 of his 22 pass attempts while allowing running back Spencer Ware to rack up 131 yards and a touchdown on 24 carries. The only notable highlight for the Raiders defensively came in the form of a Khalil Mack sack of Smith.

The Jacksonville Jaguars came out of their bye week on a high note, winning their 2nd straight, this time a 17-16 win over the Chicago Bears. The Jags trailed 13-0 heading into the 4th, but scored 17 of the last 20 points in a 12-minute span to eke out the W. Blake Bortles completed 20 of his 33 pass attempts for 271 yards and a touchdown in the last 3 minutes that outweighs his lone interception on the day. Chris Ivory may not have made the most efficient use of his 11 carries, logging 32 yards, however one of them was a 1-yard touchdown early in the 4th quarter that got the Jacksonville rally started. Allen Hurns led the Jaguars with 74 yards receiving on 5 carries and Marqise Lee caught a team-high 6 passes for 61 yards. However the star of the Jacksonville receiving core on the day was Arrelious Benn whose lone reception turned out to be a 51-yard catch and run to give the Jags the lead that they would not relinquish the rest of the way. Defensively, the Jaguars put forth an average effort, allowing nearly 400 yards of total offense to a banged up Chicago squad, however they did get the stops late when they needed them.

Hold on, Jacksonville is favored?!  Sure they’ve won two straight, but they’re giving us points with the road team who are 3-0 on the road this season, not to mention 6-0 against the spread in their last 6 road games! Meanwhile, Jacksonville is 0-2 at home this season. I’m sorry, but I’ll take the easy money with an Oakland squad that is angry after being embarrassed in a division game at home last week.

Give me Oakland and the points.