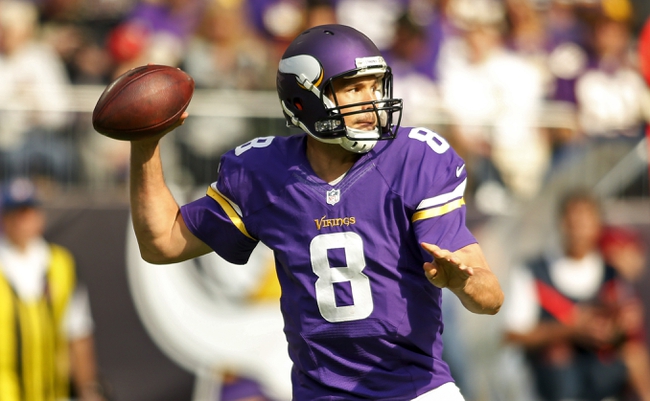 Coming up in Week 7 of the NFL season from Lincoln Financial Field on Sunday, October 23, the Minnesota Vikings will be meeting up with the Philadelphia Eagles.

The Vikings are coming into this game at a smooth 5-0 and fresh off a bye week to recharge their batteries. Minnesota’s most recent victory came against Houston in Week 5, a 31-13 result. In that one, Vikings QB Sam Bradford went 22-of-30 for 271 yards and two touchdowns, while Matt Asiata led the team in rushing on 14 carries for 55 yards and a TD. Adam Thielen was the big receiving contributor on seven catches with 127 yards and a TD for the Vikings.

On the Minnesota season so far, Bradford is 88-of-125 for 990 yards and six touchdowns, while Jerick McKinnon is the rush leader with 57 attempts for 174 yards and one TD. Stefan Diggs leads the Vikings on 25 receptions for 372 yards and one TD.

Over on the Eagles’ side, they’re coming into this game at 3-2, and just finished up with a 27-20 loss to the Redskins. Philadelphia gave up a 493 offensive yards in a bad defensive outing, while QB Carson Wentz couldn’t get much going on 11-for-22 and 179 yards. Ryan Mathews put up nine carries for 60 yards to lead the Philly rushing attack, and Jordan Matthews hauled in three catches for 75 yards.

So far this year for the Eagles, Wentz has managed to go 102-of-157 for 1186 yards and seven touchdowns. Mathews leads the rushing game on 206 yards with three touchdowns, while Philadelphia’s other Matthews (Jordan) is tops in the receivers with 22 catches for 344 yards and two scores.

The Vikings are out of a lot of people’s minds right now due to their bye week, but they’ve been pretty darn overwhelming this year. Minnesota has beaten such quality competition as the Packers and Panthers already, and has held opponents to 16 points or fewer in every game. I don’t think Philadelphia has the firepower to go against that stout Vikings defense, so I’ll take Minnesota for the win here.