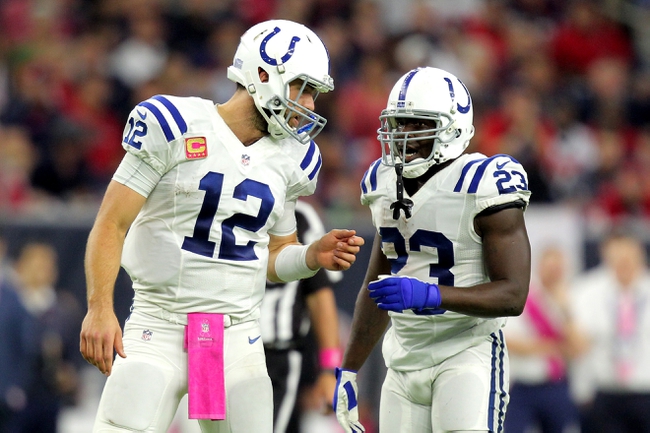 Headed our way in Week 7 NFL action from LP Field in Nashville on Sunday, October 23, the Indianapolis Colts will meet up with the Tennessee Titans in a divisional rivalry game.

The Colts come into this game with a 2-4 record, and just finished off a 26-23 overtime loss to the Texans. In that one, Indianapolis was up by 14 points in the final three minutes, but couldn’t close it out. Colts QB Andrew Luck finished 21-of-32 for 252 yards, a TD and a pick, while Frank Gore finally got over the century mark with 106 yards on 22 totes. Chester Rogers came from out of nowhere in Indianapolis to lead the team in receiving with four catches for 63 yards.

So far this year, Luck is 152-of-237 with 1721 yards and 11 touchdowns, and Gore has 100 attempts with 434 yards and two touchdowns for the Colts. TY Hilton leads the receivers in Indianapolis with 38 catches for 556 yards and three touchdowns.

As for the Titans, they’re entering play in Week 7 with a 3-3 record, and this past Sunday they managed to eke by the Browns 28-26. Tennessee QB Marcus Mariota logged a 17-of-24 line for 284 yards and three touchdowns, while DeMarco Murray led the rush attack on 21 carries, 65 yards and a TD. Kendall Wright was the Titans’ high man in receiving with eight catches for 133 yards and a TD.

On the Tennessee season so far, Mariota has put up a 117-of-189 mark for 1372 yards and 10 touchdowns with six interceptions. The Titans rush is led by Murray’s 526 yards and four scores, while Richard Matthews has top honors among receivers so far with 19 catches for 282 yards and two scores.

Unless you’re a fan of either team, there’s not a whole lot to like here. I will say that both the Titans and the Colts have shown flashes this year, but neither has amounted to much. I don’t have a whole lot of faith in the Colts defense—they’ve allowed at least 22 points in every game this year. Tennessee (who has a much better defense) has the Colts there, and the Titans should win this matchup.