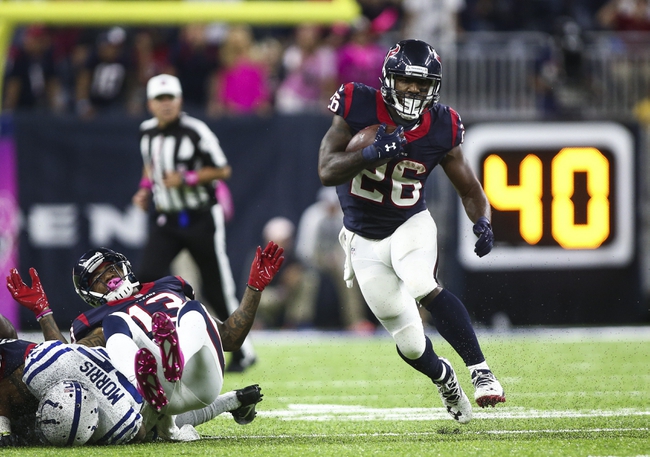 The Houston Texans head to Mile High to take on the Denver Broncos to close out week 7 on Monday Night Football.

The Houston Texans eked out a 26-23 overtime victory over the Indianapolis Colts on the week 6 edition of Sunday Night Football. Houston trailed 23-9 with 7 minutes to go, and managed to tie it up at 23 with 0:49 left before getting a stop in overtime and kicking the game-winning field goal. Brock Osweilere completed 25 of his 39 pass attempts for 269 yards, a pair of touchdowns and an interception. Lamar Miller had his best game of the season, logging 149 yards and a touchdown on 24 carries while also racking up 3 receptions for 29 yards and a touchdown through the air. Tight end C.J. Fiedorowicz led the Texans with 85 yards on 6 receptions including a 26-yard touchdown reception to tie the game with less than a minute left. DeAndre Hopkins caught a team high 9 passes for 71 yards. Defensively, Houston allowed 392 yards of total offense, the highest total by any opponent this season. The highlights for Houston in the game came by way of a trio of sacks by Bryant McKinney, Whitney Mercilus and Andre Hal to go along with a Robert Nelson Jr. interception of Colts QB Andrew Luck.

The Denver Broncos dropped their 2nd straight game, this time a 21-13 decision to the San Diego Chargers to kick off week 6 on Thursday Night Football. Trevor Siemian returned from a shoulder injury to throw 50 passes, completing 30 of them for 230 yards and a touchdown while being sacked twice. Devontae Booker made the most of the small workload he was given, logging 46 rushing yards on 5 carries while starter C.J. Anderson got the most work, putting up only 37 yards on his 10 carries. Emmanuel Sanders led the Broncos with 40 yards on 4 receptions while Demaryius Thomas caught a team-high 5 passes for 35 yards. It’s not often you lose a game when only allowing 265 yards of total offense and 21 points, however that’s exactly what happened to Denver as they fell behind 19-3 to start the 4th-quarter and never recovered. The only notable highlights came in the form of a Von Miller sack and a Will Parks fumble recovery.

Both of these teams struggle against the spread on Monday nights however I feel more confident backing Houston. They have to be brimming with confidence after making a massive comeback late to win a division game. Sure, Denver is rested but they have lost 2 straight including their last game to a subpar San Diego squad. Look for this to be a tight game throughout, so I will side with Houston and the points.

The pick in this article is the opinion of the writer, not a Sports Chat Place site consensus.
Previous Pick
Detroit Lions vs. Washington Redskins - 10/23/16 NFL Pick, Odds, and Prediction
Next Pick
Free NFL Picks, Previews, Odds, Schedule, and TV Info for Every Game for Week 7 2016