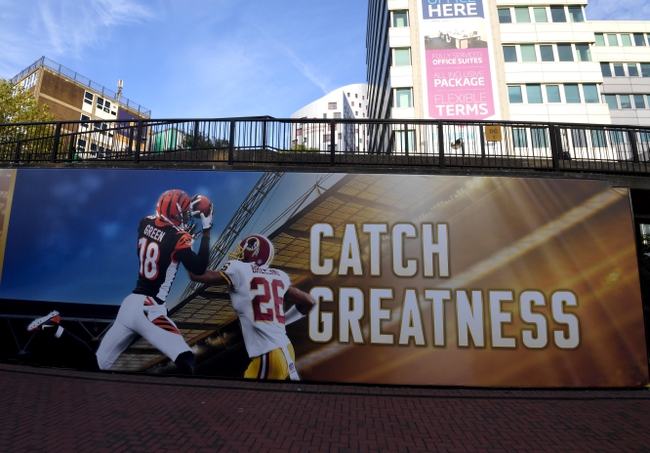 The Washington Redskins and Cincinnati Bengals cross the pond to play an NFL week 8 game Sunday morning in England at Wembley Stadium.

The Cincinnati Bengals could use back-to-back wins for the first time this season to get back to a .500 record. Five of the Cincinnati Bengals last eight victories have come on their home field, although this obviously isn't a true home game. Andy Dalton is completing 67.5 percent of his passes for 2,065 yards, eight touchdowns and two interceptions. Dalton has two or less touchdown passes in nine straight games. A.J. Green and Brandon LaFell have combined for 1,147 receiving yards and seven touchdowns while Giovani Bernard has 30 receptions. The Cincinnati Bengals ground game is averaging 115.7 yards per contest, and Jeremy Hill leads the way with 439 yards and four touchdowns. Defensively, Cincinnati is allowing 23.1 points and 354.6 yards per game. Karlos Dansby leads the Cincinnati Bengals with 48 tackles, Carlos Dunlap has five sacks and Shawn Williams has one interception.

The Cincinnati Bengals don't look anything like the team we expected to see before the season and you can't feel comfortable laying any number with the way they've played. The Redskins also seem to play their best football outside of Washington. I almost want to take the Redskins and my free field goal, but the Bengals are by far the more talented team here and that Bengals wide receiving corps should dominate this game, especially if Norman isn't cleared to play.

I'm going to give the Bengals one more chance and take them to win a game they should win rather easily.