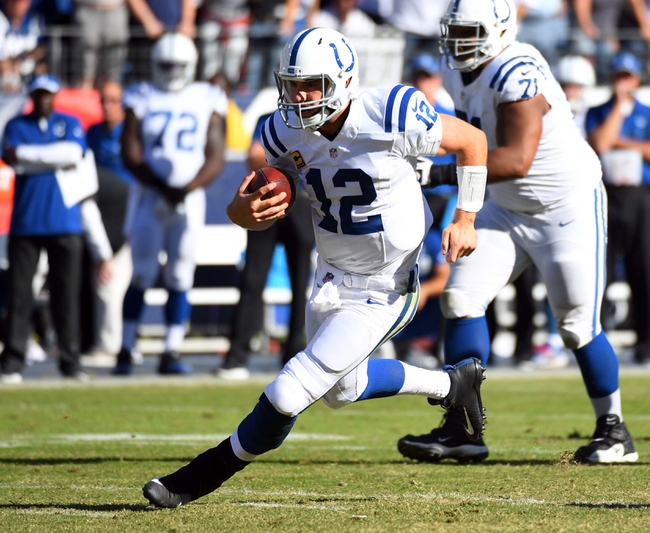 The Indianapolis Colts and the Kansas City Chiefs face off on Sunday in week 8 NFL action.

The Indianapolis Colts are 3-4 this season and that puts them in second place in the AFC South. The Colts offense is averaging 27.7 points and 372.4 yards per game and they have a plus 1 turnover ratio. Indy QB Andrew Luck has completed 64.9 percent of his passes with 14 touchdowns and 4 interceptions but he has been sacked 25 times. Frank Gore still has something I the tank as he leads the Colt sin rushing with 495 yards and 2 touchdowns and he has 20 catches and 2 receiving touchdowns while T.Y. Hilton is the top receiver with 45 catches and 4 touchdowns. The Colts defense is allowing 28.6 points and 399.7 yards per game with 2 interceptions, 9 fumble recoveries, and 11 sacks. D’Qwell Jackson is Indy’s top tackler with 45 tackles, Mike Adams has 42 tackles, and Erik Walden has 5 sacks. The Colts are getting it done but they need to improve on defense and protecting the QB.

The Kansas City Chiefs are 4-2 this season as they are climbing up the standings in the AFC West. The Chiefs offense is averaging 22.7 points and 347.7 yards per game and they are plus 7 in turnover ratio. Kansas City QB Alex Smith has completed 67.8 percent of his passes with 7 touchdowns and 2 interceptions and he has rushed for a touchdown. Spencer Ware has taken over the Chiefs rushing attack and he has 492 yards and 2 touchdowns and Jeremy Maclin and Travis Kelce each have 27 catches to lead the team. The KC defense is allowing 20.5 points and 371.3 yards per game with 10 interceptions, 6 fumble recoveries, and 8 sacks. Derrick Johnson leads the Chiefs in tackles with 44 and Steven Nelson and Eric Berry each have 27tackles. The Chiefs live and die by the turnover and of late they have been living by it.

The Chiefs are just a small favorite here but they should be able to get pressure on Luck and that should be the difference in this game. Luck appears to not be able to take off with the ball anymore and it has cost him and is costing his team.