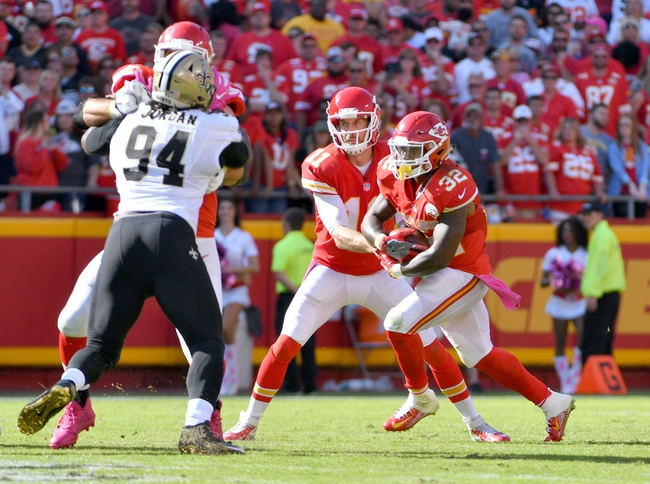 The Kansas City Chiefs head to Lucas Oil Stadium to take on the Indianapolis Colts in week 8 NFL action.

The Kansas City Chiefs improved to 4-2 with a 27-21 victory over the New Orleans Saints in week 7. Alex Smith managed to rack up 214 yards and a pair of touchdowns on 17 of 24 passing while the offensive line did their job protecting Smith as he managed to avoid getting sacked on the afternoon. Spencer Ware led the Chiefs’ ground attack with 77 yards on 17 carries. Ware also had a team-high 54 yards to go along with a receiving touchdown while Jeremy Maclin caught 4 passes to lead Kansas City, logging 40 yards in the process. Maclin ended up being the only Kansas City receiver to catch more than 2 passes on the afternoon. There were pros and cons defensively for the Chiefs in week 7, as the Chiefs let the Saints be the Saints, putting up 463 yards of total offense. However on the plus side, they did hold New Orleans to 21 points and Marcus Peters recovered a fumble for KC while safety Daniel Sorensen logged Kansas City’s lone sack and interception of Drew Brees on the day.

The Indianapolis Colts improved to 3-4 with a 34-26 division victory over the Tennessee Titans in week 7. Andrew Luck looked great, completing 27 of his 39 pass attempts for 353 yards and 3 touchdowns, while being sacked only twice on the day. The Colts’ run game decided to make an appearance in week 7 as Frank Gore led the way with 61 yards on 17 carries while also catching 5 balls out of the backfield for 22 yards and a touchdown. Andrew Luck called his own number 5 times for 17 yards on the ground. T.Y. Hilton logged a team-high 133 yards and a touchdown on his 7 receptions, while tight end Jack Doyle had his 2nd big game of the season, catching 9 passes to lead the colts in that category, racking up 78 yards and a touchdown in the process.. Defensively, it was a decent day for the Colts, as they managed to record 3 sacks courtesy of Erik Walden, Akeem Ayers, while T.Y. McGill’s sack forced a fumble that was recovered by Robert Mathis for a 14-yard touchdown runback, essentially sealing the game for the Colts.

This is a hard game to call as it could go either way. Instead I’m going to side with the over. Both teams seems to have found their groove offensively, and neither defense has done anything to wow me over the last few weeks.

This game should go over the total.