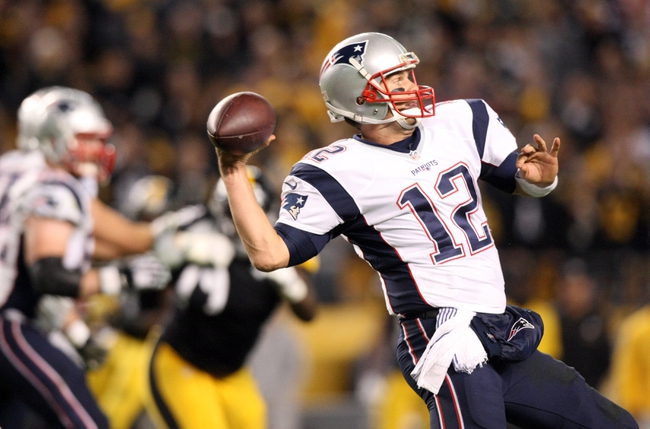 The New England Patriots look to avenge their only loss as they head to New Era Field to take on the Buffalo Bills in week 8 AFC East action.

The New England Patriots improved to 6-1 following a 27-16 victory over the Pittsburgh Steelers in week 7. Tom Brady had his least productive outing since returning from suspension, tossing for 19 of 26 passing for 222 yards and a pair of touchdowns while avoiding the interception for the third consecutive game. Legarrette Blount racked up 127 yards on his 24 carries to go along with a pair of touchdowns of his own. Rob Gronkowski led the Pats with 93 yards and a touchdown on 4 catches while Julian Edelman caught a team-high 9 balls for 60 yards on the day. James White caught a pair of passes out of the backfield for 32 yards and a touchdown. Defensively, the Pats allowed a Ben Roethlisberger-less Steelers squad to rack up 281 yards through the air and 375 yards of total offense on the day that was highlighted by a Malcolm Butler interception of Pittsburgh QB Landry Jones and a forced fumble by Alan Branch out of the hands of Pittsburgh running back, LeVeon Bell.

The Buffalo Bills fell to 4-3 with a narrow 28-25 defeat at the hands of the Miami Dolphins. Tyrod Taylor completed only half of his 28 pass attempts for 221 yards and a touchdown. Taylor also led the team in rushing with 7 carries for 35 yards after starting running back LeSean McCoy went down due to injury. McCoy didn’t make much of an impact before he left the game, putting up only 11 yards on 8 carries. Marquise Goodwin caught 4 passes for 93 yards and a touchdown, both of which were team-highs in week 7, with no other Buffalo receiver catching more than 2 passes for more than 31 yards. Defensively, it was a poor showing for the Bills as they allowed 454 yards of total offense including 214 rushing yards to Miami running back Jay Ajayi, who had his second consecutive 200-yard rushing game. Lorenzo Alexander accounted for the only sack of Miami QB Ryan Tannehill on the day as the Bills defense just couldn’t get off of the field as the Dolphins racked up over 37 minutes of time of possession.

I’ve said it before and I’ll say it again. I think this Patriots team will run the table the rest of the way. New England wants to stick it to the NFL and Roger Goodell, and I think it continues against an average Bills team that just got destroyed by Miami last week. New England wants to avenge their lone loss of the season, and a shutout loss at that. Add in the fact that Tom Brady is 25-3 in his career against the Bills, and that makes this an easy pick.

Lay the points with New England.