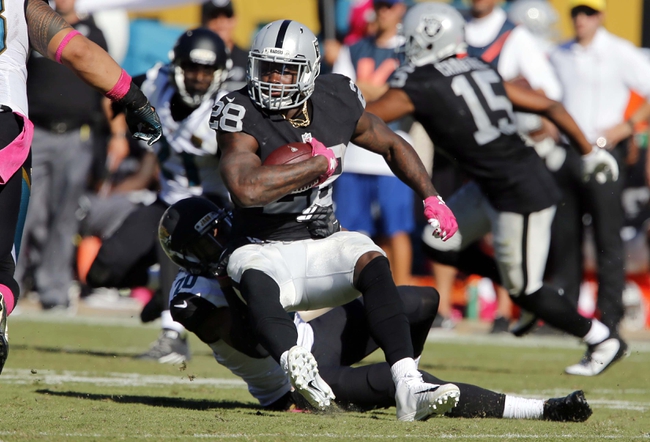 The Oakland Raiders look to win in Florida for the second time in as many weeks at they take on the Tampa Bay Buccaneers in a super bowl 37 rematch in week 8 NFL action.

The Oakland Raiders improved to 5-2 with a 33-16 handling of the Jacksonville Jaguars in week 7. Derek Carr completed 23 of his 37 pass attempts on the day for 200 yards and a touchdown, while avoiding an interception for the first time in 3 weeks. Latavius Murray led the charge out of the Oakland backfield, making good use of his 18 carries, logging 59 yards and a pair of touchdowns on the day. Murray led the Raiders backfield which saw 7 different ball carriers on the afternoon. Michael Crabtree led the Oakland receiving core with 8 catches for 96 yards and a touchdown, both team-highs in the game. Amari Cooper followed up his back-to-back 100-yard receiving outings with 4 catches for a mere 29 yards in week 8. Defensively, the Raiders had a decent afternoon, allowing 344 yards of total offense, the lowest total by any opponent so far this season, and the 16 points against were the second lowest allowed this season by the Oakland defense. The performance was highlighted by a Khalil Mack sack of Jacksonville QB Blake Bortles, who also threw a pair of interceptions that Raiders DBs Reggie Nelson and Danny Amerson found themselves on the receiving end of.

The Tampa Bay Buccaneers climbed to 3-3 with a 34-17 victory over the San Francisco 49ers in week 7. Jameis Winston completed 70% of his 30 pass attempts for 269 yards, 3 touchdowns and an interception on the day. The Bucs put forth a two-headed monster out of the backfield, with Jacquizz Rodgers leading the way, racking up 154 yards on 26 carries and Peyton Barber was not far off of the pace, as he logged 84 yards and a touchdown on 12 carries. Mike Evans had a field day on the 49ers secondary, catching 8 passes for 96 yards and a pair of touchdowns, both team-highs. While Russell Shepard was not far behind, catching 5 passes for 77 yards and a touchdown of his own. Defensively, the Bucs were all over the Niners, as they suffocated San Fran, holding QB Colin Kaepernick to 143 yards passing, however San Francisco did 157 yards on the ground on the day. That didn’t stop Tampa Bay from registering 4 sacks, 3 fumbles where 1 was recovered, an interception and a partridge in a pear tree.

Anyone who I’ve talked to knows I’m high on this Raiders team as they look as legit as they have in years. The oddsmakers keep showing no love to Oakland, yet they’re 4-0 on the road this season. Tampa Bay is looking like a team ready to compete, but Oakland is already there, leading their division and until I have a reason not to, I’m going to keep riding the hot hand.

Give me Oakland in a pick ‘em.