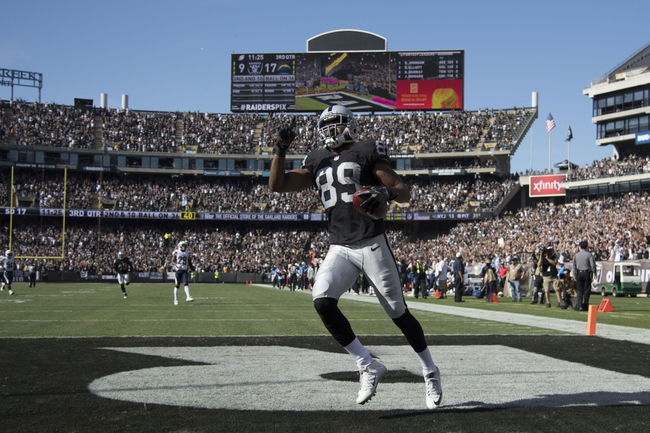 The Tampa Bay Buccaneers and the Oakland Raiders face off on Sunday in Week 8 NFL football action.

The Tampa Bay Buccaneers are 3-3 this season and that is good enough for2nd place in the NFC South. The Buccaneers offense is averaging 21.3 points and 365.3 yards per game and they have a minus 3 turnover ratio. Bucs QB Jameis Winston has completed 59.9 percent of his passes with 12 touchdowns and 9 interceptions and he has been sacked 14 times and he has also rushed for a touchdown. Jacquizz Rodgers is the Buccaneers top option rushing the football and he has rushed for 324 yards while Mike Evans is their top receiver with 40 catches and 6 touchdowns. The Tampa Bay defense is allowing 26.5 points and 350.7 yards per game with 4 interceptions, 5 fumble recoveries, and 13 sacks. Kwan Alexander is the Bucs top tackler with 53, Chris Conte has 36 tackles, and Bradley McDougald has 33 tackles. The Buccaneers have had their ups and downs but they are very much in the hunt for a playoff spot.

The Oakland Raiders are 5-2 this season and that puts them in first place in the AFC West. The Raiders offense is averaging 26.4 points and 369.6 yards per game and they are plus 8 in turnover ratio. Oakland QB Derek Carr has completed 65.9 percent of his passes with 13 touchdowns and 3 interceptions and he has been sacked just 7 times. Latavius Murray anchors the Raiders rushing attack with 231 yards and 5 touchdowns and Amari Cooper is the leading receiver with 40 catches and a touchdown and Michael Crabtree has 39 catches and 6 touchdowns. The Raiders defense is allowing 25.6 points and a 32nd ranked 430.4 yards per game with 7 interceptions, 10 fumble recoveries, and 9 sacks. Reggie Nelson is Oakland’s top tackler with 42 tackles, Malcolm Smith has 35 tackles, and Cory James has 34 tackles. THe Raiders continue to get it done and while their defense has been suspect their offense has been able to make up for it.

This one could turn into a shootout but the Raiders just have more weapons and while the Bucs are home, I don’t think they can get enough pressure on Carr and in the end that should be their undoing.