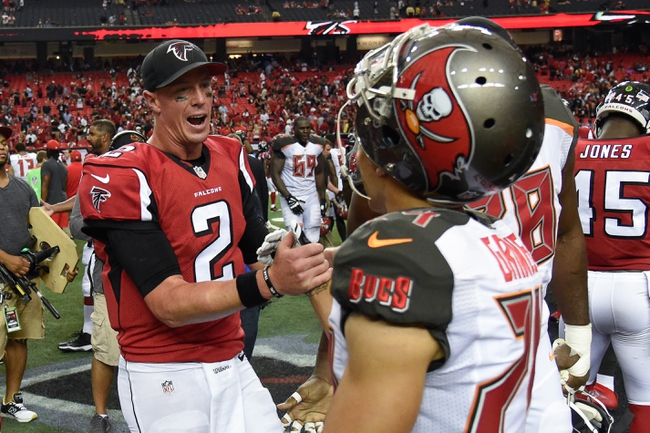 The Atlanta Falcons look for their fourth road win of the season to build on their NFC South division lead. The Atlanta Falcons have won four of their last five road games overall. Matt Ryan is completing 69.2 percent of his passes for 2,636 yards, 19 touchdowns and four interceptions. Ryan has two or more touchdown passes in six of his last eight games. Julio Jones and Mohamed Sanu have combined for 1,201 receiving yards and seven touchdowns while Tevin Coleman has 19 receptions. The Atlanta Falcons ground game is averaging 111.5 yards per contest, and Devonta Freeman leads the way with 543 yards and three touchdowns. Defensively, Atlanta is allowing 18.9 points and 379.3 yards per game. Kemal Ishmael leads the Atlanta Falcons with 50 tackles, Vic Beasley Jr. has 7.5 sacks and Deion Jones has two interceptions.

The Buccaneers beat Atlanta earlier this season and have actually won the last three games against the Falcons. I'm not ready to jump on the Falcons bandwagon and believe their strong start, as the offense struggles outside of Jones and the defense can give up big plays. The Buccaneers are better than their record indicates and they had chances to beat a decent Oakland Raiders team last week. On short rest and the humidity factor gives Tampa Bay the advantage at home. This is a tough spot for the Atlanta Falcons.

Give me the Tampa Bay Buccaneers and the points here.

The pick in this article is the opinion of the writer, not a Sports Chat Place site consensus.
Previous Pick
NFL Week 8 2016 Picks, Previews, Odds, Schedule, and TV Info
Next Pick
San Francisco 49ers vs. New Orleans Saints - 11/6/16 NFL Pick, Odds, and Prediction