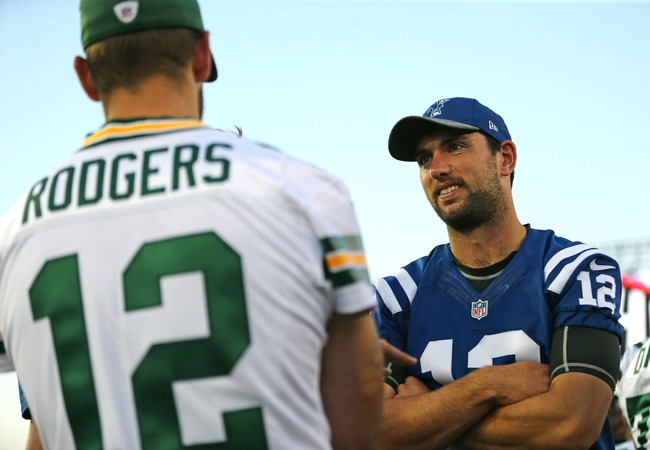 In Week 9 NFL action on Sunday, November 6 from Lambeau Field, the AFC and NFC will clash as the Indianapolis Colts visit the Green Bay Packers.

The Colts limp into this one at 3-5 on the year, fresh off a 30-14 loss at home against the Chiefs. In that game, Indianapolis allowed a pair of touchdown passes from Nick Foles, who was playing in relief of the injured Alex Smith. Colts QB Andrew Luck had a mediocre day on the other side, bagging a 19-of-35 line for 210 yards, two TDs and one pick. Luck also led an otherwise lackluster running game with nine carries for 60 yards. Donte Moncrief had a decent game himself with four receptions for 41 yards and a touchdown.

So far this year, Luck is sitting at 198-of-311 for 2284 yards and 16 touchdowns, while Frank Gore leads the Colts in rushing on 126 carries for 532 yards and two touchdowns. T.Y. Hilton is the Indianapolis lead receiver with 46 grabs for 709 yards and four scores.

Over on the Packers’ side, they’re coming off a tough-to-swallow 33-32 loss to the Falcons which dropped them to 4-3 on the season. In that game, Atlanta QB Matt Ryan hit Mohamed Sanu with a TD pass with 31 seconds remaining to seal the win. On the other side, Packers QB Aaron Rodgers had a great day on 28-of-38 passing for 246 yards and four touchdowns, while also leading the rush on six carries for 60 yards. Jordy Nelson was Green Bay’s lead receiver on four catches for 94 yards and a TD.

On the season thus far for the Packers, Rodgers is 176-of-275 for 1742 yards and 17 touchdowns, while Eddie Lacy is the top rusher on 71 carries for 360 yards. Davante Adams leads the Packers’ receiving corps on 40 catches for 424 yards and five TDs.

Considering these teams’ recent play, this really isn’t too tough of a call as far as win-loss. The Packers have scored at least 23 points in four of their last five, and it looks like Rodgers is back in form. On the other side, the Colts keep finding ways to shoot themselves in the proverbial foot, whether it be penalties or blown plays and the like. Still, Indianapolis can score: they’ve hit at least 23 points in five of their last six. The line in this one seems right on, so it’s probably one to stay away from. Still, Green Bay should win, but the Colts have the offensive ability to cover.