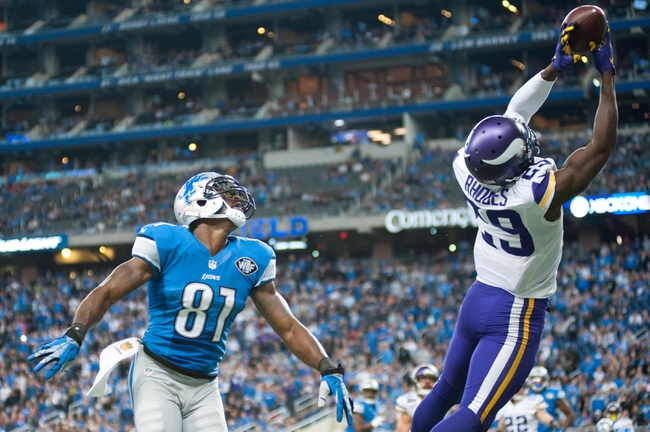 The Minnesota Vikings and the Detroit Lions face off on Sunday in Minnesota in a NFC North NFL Football week 9 rivalry game.

The Minnesota Vikings are 5-2 this season but they have lost their last two games with both of those taking place on the road. The Vikings offense is sputtering averaging a 23rd ranked 19.9 points per game and a 31st ranked 293.3 yards per game but their plus 11 turnover ratio is what has been the difference maker. Minnesota QB Sam Bradford has completed 66.5 percent of his passes with 8 touchdowns and 1 interception but he has been under pressure getting sacked 19 times. With Adrian Peterson out Jerrick McKinnon is the Vikings top rusher with 217 yards and a touchdown and Stefon Diggs is the top receiver with 35 catches and 2 touchdowns and Kyle Rudolph has 31 catches and 3 touchdowns. The Vikings have the top scoring defense allowing 14.9 points per game and 2nd ranked in yards allowed at 297.1 per game and they have 9 interceptions, 7 fumble recoveries, and 20 sacks. Eric Kendricks in Minnesota top tackler with 54, Harrison Smith has 49, and Everson Griffin has 5 sacks. The Vikings defense was burned last week on the ground and their inability to protect the QB made matters worse.

The Detroit Lions are 4-4 this season and once again they just can’t seem to find a lot of consistency o the field. The Lions offense is averaging 22.9 points and 341.1 yards per game and they are plus 2 in turnover ratio. Detroit QB Matthew Stafford has completed 67.7 percent of his passes with 16 touchdowns and 4 interceptions and he has been sacked 19 teams. Theo Riddick leads the Lions in rushing with 227 yards and a touchdown with 34 receptions and 4 receiving touchdowns while Golden Tate is the top receiver with 38 catches and touchdown and Marvin Jones has 36 catches and 4 touchdowns. The Lions defense is allowing 23.8 points and 370 yards per game with 4 interceptions, 7 fumble recoveries, and 18 sacks. Tahir Whitehead is Detroit’s leading tackler with 74, Glover Quin has 36 tackles, and Kerry Hyder has 5.0 sacks. The Lions lack of a running game is killing them once again but this unit of receivers is one of the better units in the NFL.

The Vikings offense is hurting without Peterson and while I don’t love the Lions here, I like them enough with the points to take them. I see this one as a hard hitting NFC North style game and this one should be fairly tight.