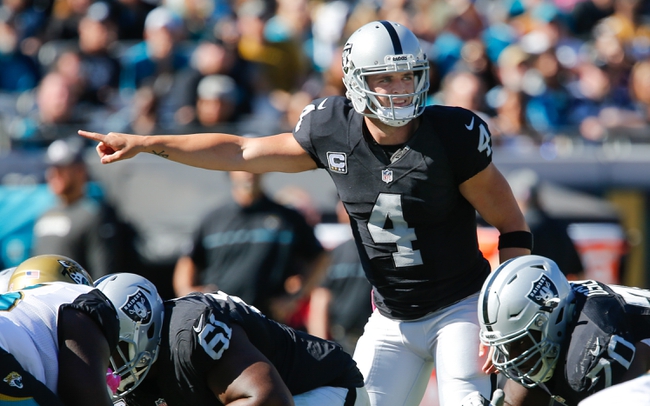 One of the NFL’s most enduring rivalries will boot back up on Sunday, November 6 from O.co Coliseum when the Denver Broncos visit the Oakland Raiders on “Sunday Night Football.”

The Broncos enter play here with a solid 6-2 record on the year. Denver has won two in a row and is fresh off a 27-19 win over the Chargers. In that one, the Broncos got a great effort from their defense with three picks and constant harassment of San Diego QB Philip Rivers. Denver QB Trevor Siemian had an iffy day on 20-of-38 passing for 276 yards and an interception, while RB Devontae Booker led the rush on 19 carries, 54 yards and a TD. Demaryius Thomas was the high man in the Broncos’ receiving game with 79 yards on five receptions.

Over on the Raiders side, they’re entering play here with a 6-2 record as well, thanks to a 30-24 overtime victory against the Buccaneers in their last appearance. Oakland QB Derek Carr tossed a 41-yard TD pass to Seth Roberts in the extra period, capping his record-breaking 513-yard, four-touchdown, 40-of-59 day. Latavius Murray led the Oakland ground game on 11 carries for 48 yards, while Amari Cooper was tops in receiving with 12 catches for 173 yards and a score.

So far this season, Carr is 214-of-323 for 2321 yards and 17 touchdowns, and Murray leads Oakland on the ground with 69 carries for 279 yards and five scores. Cooper is the Raiders’ best receiver so far with 52 receptions, 787 yards and two touchdowns.

This is being billed as a pick ‘em game, which sounds about right. Both the Broncos and the Raiders are playing well. Denver has put up 27 points in each of their last two outings, while Oakland has 63 points combined in their last two. I really like what Carr and the Raiders offense have been doing lately, but in their last appearance against a higher-tier defense (Kansas City), they put up just 10 points. I’ll take the Broncos here in a big defensive effort, but realistically this game could easily go either way. It doesn’t seem like one to bet on, so just sit back and enjoy what’s sure to be a great matchup.