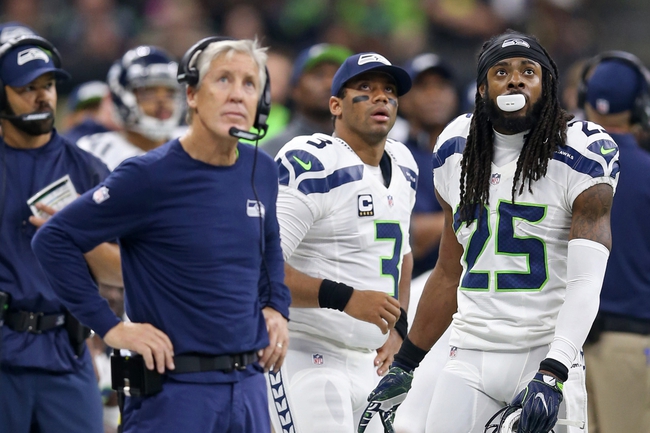 The Buffalo Bills and Seattle Seahawks square off in a NFL matchup Monday night at CenturyLink Field on ESPN.

The Buffalo Bills look for their third road victory of the season to get a game above a .500 record. The Buffalo Bills have lost six of their last eight road games. Tyrod Taylor is completing 58.7 percent of his passes for 1,480 yards, nine touchdowns and two interceptions. Taylor has one or less touchdown passes in five of his last eight games. Robert Woods and Charles Clay have combined for 564 receiving yards and one touchdown while Marquise Goodwin has 12 receptions. The Buffalo Bills ground game is averaging 154.1 yards per contest, and LeSean McCoy leads the way with 598 yards and six touchdowns. Defensively, Buffalo is allowing 21.5 points and 360.3 yards per game. Zach Brown leads the Buffalo Bills with 87 tackles, Lorenzo Alexander has nine sacks and Stephon Gilmore has two interceptions.

The Seattle Seahawks look to remain undefeated at home while building on their NFC West division lead. The Seattle Seahawks have won six of their last seven regular season home games. Russell Wilson is completing 65.6 percent of his passes for 1,812 yards, five touchdowns and two interceptions. Wilson has zero touchdown passes in his last three games. Doug Baldwin and Jimmy Graham have combined for 923 receiving yards and three touchdowns while Jermaine Kearse has 22 receptions. The Seattle Seahawks ground game is averaging 81.4 yards per contest, and Christine Michael leads the way with 446 yards and five touchdowns. Defensively, Seattle is allowing 15.6 points and 319.4 yards per game. Bobby Wagner leads the Seattle Seahawks with 72 tackles, Cliff Avril has 7.5 sacks and Richard Sherman has two interceptions.

I don't like the Buffalo Bills as a team, but you can't deny they have a great defense and play hard every week. The Bills are also tied with the Denver Broncos for the most sacks in the NFL with 26. That's a key stat considering Wilson hasn't been himself since injuring his ankle and is more of a sitting duck in the pocket. Wilson hasn't thrown a touchdown in three weeks, but he's not buying himself time or able to make plays with his legs. Rex Ryan is going to blitz early and often, and given what we've seen from the Bills, he's going to have success. I don't trust the Bills offense, but his is still a dangerous game for the Seattle Seahawks.

I'll take the road team and my free touchdown.

The pick in this article is the opinion of the writer, not a Sports Chat Place site consensus.
Previous Pick
Cleveland Browns vs. Dallas Cowboys - 11/6/16 NFL Pick, Odds, and Prediction
Next Pick
NFL Week 9 2016 Picks, Previews, Odds, Schedule, and TV Info