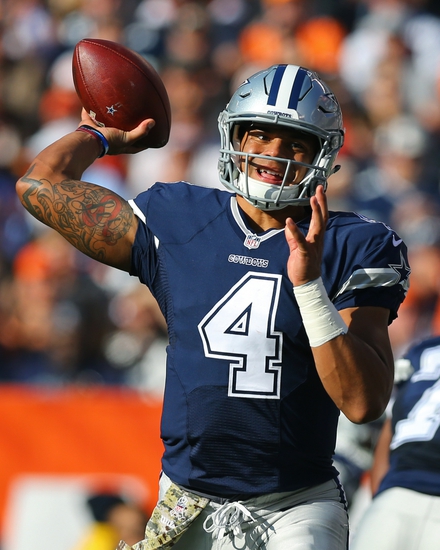 The Dallas Cowboys head to Heinz Field to take on the Pittsburgh Steelers in an inter-conference battle in week 10 NFL action.

The Dallas Cowboys won their 7th straight to improve to 7-1 with a 35-10 beatdown on the still-winless Cleveland Browns. Dak Prescott looked great once again, as he completed 21 of his 27 passes for 247 yards and 3 touchdowns while avoiding the interception for the first time in 3 weeks. Ezekiel Elliott split the workload out of the Cowboys backfield with backup Alfred Morris, however it was Elliott that still put on quite the show as he racked up 92 yards and a pair of touchdowns on his 18 carries, while Morris used his 17 carries to put up 56 yards of his own in the victory. Jason Witten looked like the Jason Witten of year’s past with his first 100-yard receiving game of the season as he caught 8 passes for 134 yards and a touchdown. Cole Beasley found himself behind Witten with 6 catches for 56 yards and a touchdown of his own, while no other Cowboys receiver caught more than 2 passes on the night. The Cowboys suffocated the Browns defensively, holding Cleveland to just 222 yards of total offense while getting to Browns QB Cody Kessler 4 times on the afternoon.

The Pittsburgh Steelers fell into a share of the AFC North lead following a 21-14 defeat at the hands of the division rival Baltimore Ravens, thus handing Pittsburgh their 3rd straight loss. Ben Roethlisberger returned from injury to throw for 264 yards on 23 of 45 passing to go along with a touchdown and an interception on the night. LeVeon Bell put forth his least productive outing since returning from suspension, racking up a mere 32 yards on 14 carries to lead what was a lackluster Steelers ground attack. Eli Rogers led the Steelers with 103 yards receiving on 6 receptions, while Antonio Brown caught a team-high 7 passes for 85 yards and a touchdown. Defensively, it was a solid outing for the Steelers as they held Baltimore to just 274 yards of total offense while sacking Ravens QB Joe Flacco 3 times and picking him off once in the game. However it just came down to which side made the bigger plays, and that turned out to be the Ravens as Pittsburgh were not able to record a point on the scoreboard for the first 51:22 of the game.

Wait a second… We are getting points with the better team that has won 7 straight and is firing on all cylinders right now? Sign me up. I get it, Pittsburgh is still a hard place to go on the road and win, but this line is downright insane.

Give me the Cowboys and the points in a game that Dallas could and should win outright.