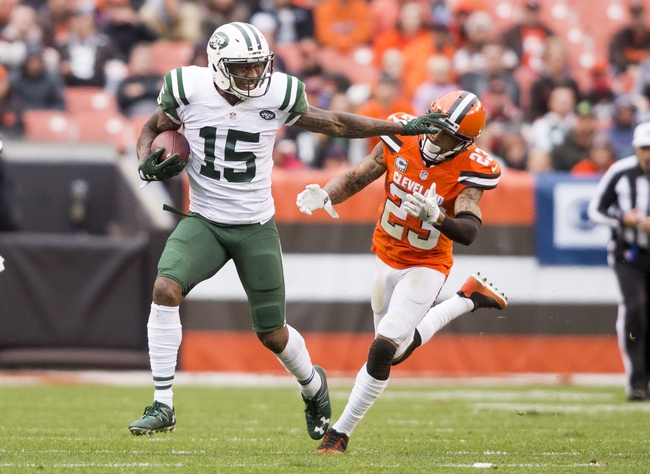 The New York jets and the Los Angeles Rams face off on Sunday in the Meadowlands in week 10 NFL action.

The New York Jets are 3-6 this season and they are coming off of a loss to the Dolphins that ended a two game winning streak. The Jets offense is averaging 19.2 points and 339.8 yards per game and they are minus 10 in turnover ratio. New York QB Ryan Fitzpatrick has been adequate for the Jets completing 56.5 percent of his passes with 13 touchdowns and 8 interceptions but he is questionable for this one and if he can’t go we saw Bryce Petty last week and have seen Geno Smith in the past. Matt Forte leads the Jets rushing attack with 634 yards and 7 touchdowns and he has caught 21 passes out of the backfield and Brandon Marshall has 40 receptions and 2 touchdowns and Quincy Enunwa has 37 receptions. Defensively the Jets are allowing 26.1 points and 353.2 yards per game with 6 interceptions, 9 fumble recoveries, and 16 sacks. David Harris and Marcus Gilchrist each have 37 tackles to lead the Jets and Leonard Williams has 6 sacks. The Jets are once again looking very much like lost cause when it comes to the big picture.

The Los Angeles Rams are 3-5 this season and they have lost their last 4 games in a row. The Rams offense is the worst in the NFL averaging 16.2 points and 311.5 yards per game and they have a minus 4 turnover ratio. Los Angeles QB Case Keenum has completed 61.5 percent of his passes with 9 touchdowns and 11 interceptions. Rams QB Todd Gurley has rushed for 451 yards and 3 touchdowns and Kenny Britt and Tavon Austin each have 37 catches. The Los Angeles defense is allowing 20.9 points and 330.9 yards per game with 4 interceptions, 8 fumble recoveries, and 15 sacks. Alec Ogletree is the Rams top tackler with 66, Mark Barron has 60 tackles, and Aaron Donald has 5 sacks. The Rams were supposed to take a step forward this year but the offense has simply been inept.

The Rams offense just can’t get the points on the board and while I don’t love the Jets and what they are doing, I see them covering this small number.