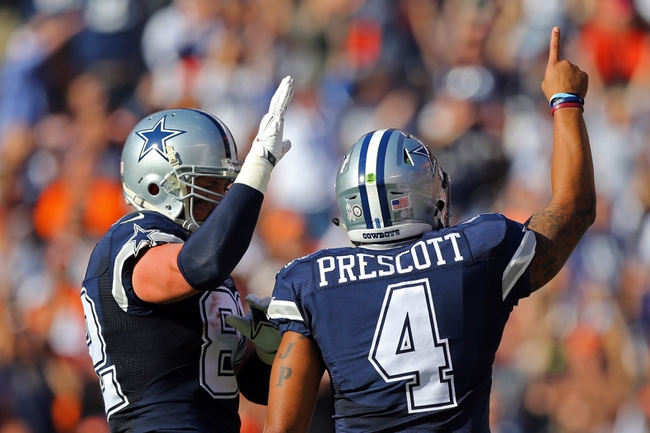 Over at Heinz Field on Sunday, November 13, we’ve got a great Week 10 NFL matchup coming between the Dallas Cowboys and the Pittsburgh Steelers.

The Cowboys come into this game rolling at 7-1 on the season. Dallas’ most recent victory came this past Sunday in a 35-10 blowout over Cleveland. In that game, Cowboys QB Dak Prescott went 21-of-27 for 247 yards and three touchdowns, while Ezekiel Elliot forged ahead on the ground with 18 carries for 92 yards and two scores. Jason Witten had a big day receiving for Dallas with eight catches for 134 yards and one touchdown.

So far in 2016, Prescott has gone 165-of-248 for 2020 yards and 12 touchdowns, and Elliott leads the ground attack in Dallas with 177 attempts for 891 yards and seven TDs. Cole Beasley is tops in the Cowboys’ receiving game this year with his 43 receptions for 499 yards and four touchdowns.

Over on the Steelers’ side, they’re flailing this season at 4-4, with a Week 9 loss 21-14 to the Ravens. Pittsburgh was down 21-0 in that one, but did score a couple of cosmetic touchdowns to make things look a little better. Steelers QB Ben Roethlisberger returned from injury (knee) to go 23-of-45 for 264 yards, a TD, an INT and a rush TD. Le’Veon Bell was Pittsburgh’s lead rusher in a dismal attack with 14 carries for 32 yards, while Eli Rogers put up a team-high 103 yards on six catches.

On the season so far, Roethlisberger is 168-of-271 for 1949 yards and 17 TDs with seven picks, while Bell is Pittsburgh’s rush leader on 83 attempts for 376 yards. Antonio Brown is tops in the Steelers’ receiving game as usual with 55 receptions for 677 yards and six scores.

Pittsburgh has looked simply lost over this three-game losing streak, during which they haven’t scored over 16 points in a game. Roethlisberger likely came back from his injury too quickly, leading to a dismal first half against Baltimore that pretty much sank any chance of a Pittsburgh victory. The Cowboys, meanwhile, are on a seven-game win streak and look great right now. Dallas has scored at least 28 points in their last four games, and are making quick work of “good” teams like the Packers and Bengals. Even though the Steelers seem to play better at Heinz this year (and just about every other year), I like Dallas to cover and keep things rolling here.