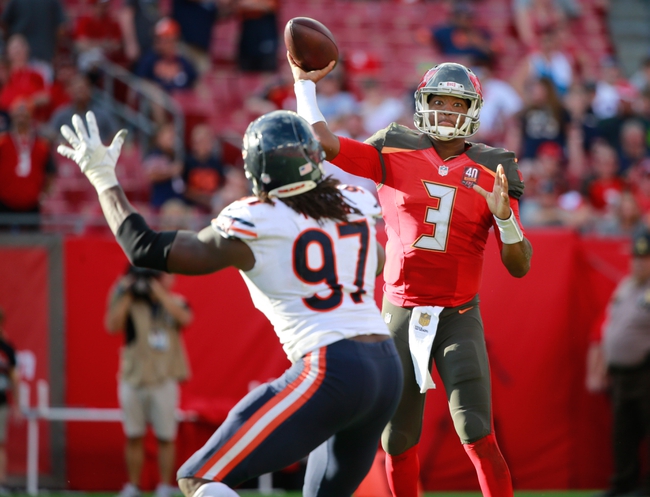 The Tampa Bay Buccaneers and the Chicago Bears face off on Sunday at Raymond James Stadium in week 10 NFL Football action.

The Tampa Bay Buccaneers are 3-5 this season and they have lost their last two games. The Buccaneers offense is averaging 22.5 points and 357.2 yards per game and they have a minus 3 turnover ratio. Tampa Bay QB Jameis Winston has completed 59.2 percent of the passes with 17 touchdowns and 9 interceptions and he has rushed for a touchdown. The Bears have been banged up in the running game but they could get an injection of life in this one as Doug Martin may return while Mike Evans has become one of the better receivers in the NFL with 55 catches and 8 touchdowns. Defensively Tampa Bay is allowing 29 points and 398.9 yards per game with 4 interceptions, 7 fumble recoveries, and 17 sacks. Kwon Alexander is the Bucs top tackler with 72, Bradley McDougald has 48 tackles, and Chris Conte and Lavonte David each have 44 tackles. Tampa Bay is still looking to make the jump from building to contender but they aren’t there yet.

The Chicago Bears are 2-6 this season and are coming off of a bye after beating the Vikings on Monday Night two weeks back. The Bears offense has been anemic averaging 16.4 points and 355.4 yards per game and they have a minus 2 turnover ratio. Jay Cutler is back in at QB for Chicago as he has completed 62.3 percent of his passes with 2 touchdowns and 2 interceptions. Jordan Howard has been the Bears leading rusher with 505 yards and 2 touchdowns and Zach Miller has 40 catches and 3 touchdowns and Alshion Jeffery has 36 catches. Defensively the Bears are allowing 22.4 points and 338.9 yards per game with 4 interceptions, 8 fumble recoveries, and 20 sacks. Jerell Freeman is the Bears top tackler with 72, Harold Jones-Quartey has 43 tackles, and Willie Young has 6 sacks. The Bears appear to be in a steep rebuilding mode and we should continue to see big changes in the future.

The line for this one isn’t out yet so please check back and I will update this with my free pick.

Mitch’s Pick Please Check Back when the Line is posted