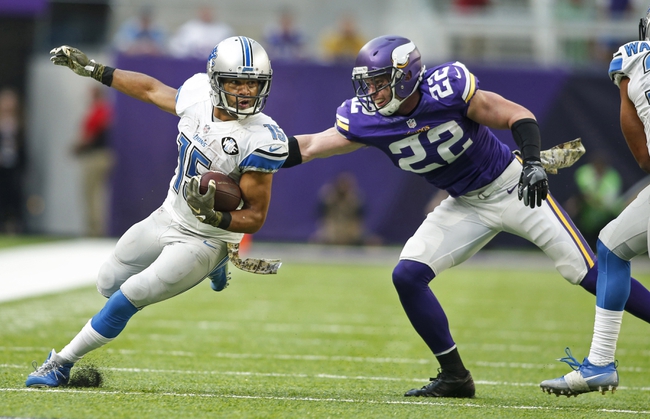 The Detroit Lions and the Jacksonville Jaguars face off on Sunday in week 11 NFL action.

The Detroit lions are 5-4 this season and that is good enough for first place in the NFC North. The Lions offense is averaging 22.8 points and 337.8 yards per game and they have a plus 1 turnover ratio. Detroit QB Matthew Stafford has completed 67.3 percent of his passes with 18 touchdowns and 5 interceptions. Theo Riddick is the Lions top rusher with 297 yards and a touchdown and Golden Tate is the top receiver with 49 catches and 2 touchdowns and Marvin Jones has 37 catches and 4 touchdowns. The Lions defense is allowing 22.9 points and 366.3 yards per game with 4 interceptions, 7 fumble recoveries, and 20 sacks. Tahir Whitehead is Detroit’s top tackler with 86, Glover Quin has 45 tackles, and Kerry Hyder has 7 sacks. The Lions are playing well but their running game is going to need to improve to take things up to the next level.

The Jacksonville Jaguars are 2-7 this year and are once again one of the worst teams in the NFL this season. The Jags offense is averaging 19.3 points and 343.3 yards per game and they have a minus 14 turnover ratio. Jacksonville QB Blake Bortles has completed 60 percent of his passes with 16 touchdowns and 11 interceptions and he has been sacked 21 times. T.J Yeldon is the Jaguars top rusher with 285 yards and a touchdown and Chris Ivory has 267 yards and a touchdown and Allen Robinson is the top receiver with 48 catches and 5 touchdowns. The Jacksonville defense is allowing 26.6 points and 327.7 yards per game with 3 interceptions, 4 fumble recoveries, and 16 sacks. Paul Posluszny is the Jags top tackler with 79, Telvin Smith has 71 tackles, and Jonathan Cyprien has 69 tackles. The Jaguars have not made the improvements they were hoping ad this team has a lot of gaping holes.

The Lions are the far better team in this one and while I expect them to win the Jaguars seem to have a knack for scoring the meaningless touchdown at the end of the game to dress up the score and I expect that same outcome here.