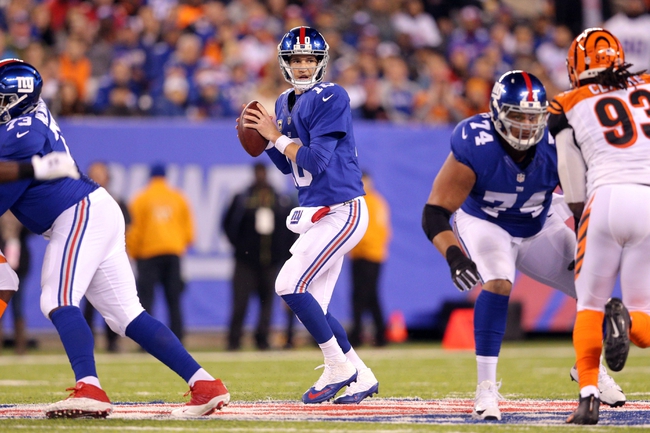 The New York Giants and the Chicago Bears face off on Sunday in Week 11 NFL action.

The New York Giants are 6-3 this season and they have won their last 4 games in a row. The Giants offense is averaging 20.2 points and 341.1 yards per game and they have a minus 8 turnover ratio. New York QB Eli Manning has completed 64.3 percent of his passes with 15 touchdowns and 10 interceptions. Rashad Jennings is the Giants top rusher with a mere 255 yards and a touchdown and Odell Beckham is the top receiver with 54 catches and 6 touchdowns and Sterling Shepard has 39 catches and 4 touchdowns. Defensively they Giants are allowing 20.4 points and 359.3 yards per game with 9 interceptions, 6 fumble recoveries, and 14 sacks. Landon Collins has been the Giants top defender with 74 tackles, 3 sacks, and 4 interceptions, Jonathan Casillas has 65 tackles, and Keenan Robinson has 50 tackles. The Giants haven’t played all that well as many penalties have gone the right way for them and they manage to exploit those to come away with wins in games where they have been clearly outplayed.

The Chicago bears are 2-7 this season and are easily one of the worst teams in the NFL. The Bears offense is 31st in scoring at 15.7 points per game and they are averaging 347.3 yards with a minus 5 turnover ratio. Chicago QB Jay Cutler has completed 59.8 percent of his passes with 3 touchdowns and 4 interceptions while being sacked 13 times. Jordan Howard is the Bears top rusher with 605 yards and 2 touchdowns and Zach Miller has 44 receptions and 3 touchdowns while Alshon Jeffery is suspended and will miss this game as well as the following 3 games. Defensively the Bears are allowing 23.9 points and 341.2 yards per game with 5 interceptions, 8 fumble recoveries, and 24 sacks. Jerrell Freeman is the Bears top tackler with 81, Danny Trevathan has 50 tackles, and Willie Young has 6.5 sacks. With this being the final year of Cutler’s contract the Bears should be in good position to draft a QB in the NFL Draft.

Apparently, the NFL’s solution to declining TV ratings is to give the team with the biggest TV market the benefit of all of the calls by the officials because the Giants numbers aren’t those of a 6-3 team especially in terms of the running game and turnover ratio but the Bears are bad this year and being depleted they should be even worse this week.