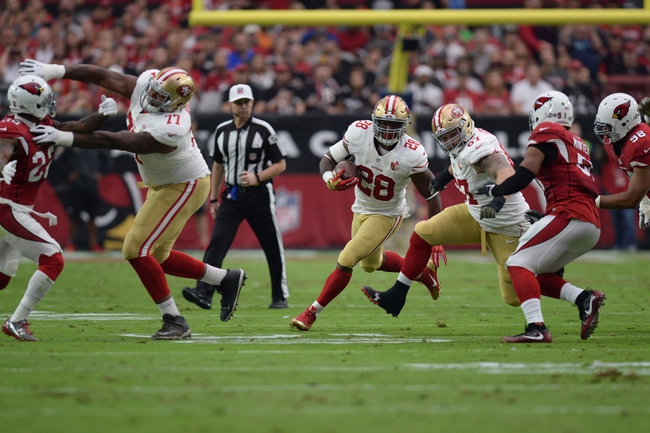 The San Francisco 49ers and the New England Patriots face off on Sunday in week 11 NFL Football action.

The San Francisco 49ers are having a miserable season and they sit at 1-8 for the year. The 49ers offense is averaging 20.8 points and 310.8 yards per game and they have a minus 3 turnover ratio. San Francisco QB Colin Kaepernick has completed 53 percent of his passes with 5 touchdowns and 2 interceptions and he has rushed for 228 yards and a touchdown. Carlos Hyde leads the 49ers in rushing with 443 yards and 6 touchdowns and Jeremy Kerley is the top receiver with 40 receptions and 3 touchdowns. The Niners defense is the worst in the NFL allowing 31.4 points and 429.7 yards per game with 7 interceptions, 10 fumble recoveries, and 16 sacks. Antoine Bethea is the top tackler for the 49ers, Eric Reid has 55 tackles, and Nick Bellore has 50 tackles. San Francisco head Coach Chip Kelly could be on his way out after just one season with the team.

The New England Patriots are 7-2 this season and they are coming off of a loss at home on Sunday Night to the Seattle Seahawks. The Patriots offense is averaging 26.8 points and 380.8 yards per game and they are plus 1 in turnover ratio. New England QB Tom Brady has completed 72.9 percent of his passes with 12 touchdowns and 1 interception. LeGarrette Blount is the Patriots top rusher with 678 yards and 12 touchdowns and Julian Edelman is the top receiver with 48 catches and a touchdown. The Patriots defense is allowing 18.1 points and 361.4 yards per game with 5 interceptions, 7 7 fumble recoveries, and 16 sacks. Patrick Chung leads the Pats with 55 tackles, Logan Ryan has 52 tackles, and Devin McCourty has 51 tackles. New England once again looks like the team to beat in the AFC.