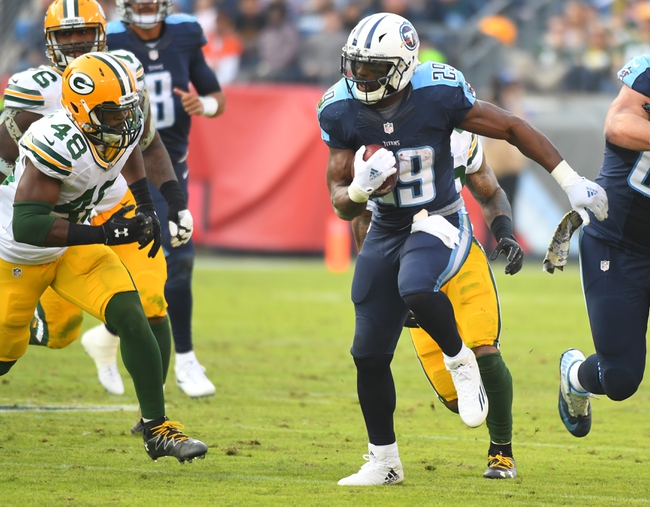 The Tennessee Titans head to Lucas Oil Stadium to take on the Indianapolis Colts in a week 11 AFC South tilt.

The Tennessee Titans improved to 5-5 with a 47-25 dismantling of the Green Bay Packers. Marcus Mariota connected on 19 of his 26 pass attempts for 295 yards and 4 touchdowns, while running back DeMarco Murray completed a pass for a 10-yard touchdown, the 1st passing touchdown of Murray’s career. Speaking of Murray, he also led the Titans ground attack with 123 yards and a touchdown on just 17 carries. Delanie Walker caught 9 passes for 124 yards and was the recipient of Murray’s touchdown pass. Tajae Sharpe followed next with 3 catches for 68 yards and a score while Rishard Matthews caught a touchdown pass for the 5th time in 6 games as he hauled in 3 balls for 63 yards. It was a pretty solid day at the office for the Titans’ defense, although they allowed 402 yards of total offense, they did manage to pick off Packers QB Aaron Rodgers twice, sack him 5 times and force a fumble which the Titans also ended up recovering, as Tennessee sent Green Bay to a 4th loss in their last 5 games.

The Indianapolis Colts had a bye week in week 10, however Indy also defeated the same Green Bay Packers, with their scoreline being 31-26 when the final whistle sounded. Andrew Luck completed 23 of 36 pass attempts for 281 yards and a touchdown, however he also gave the ball away twice via a pair of interceptions. Frank Gore led the Colts with 60 yards and a pair of touchdowns on 19 carries. T.Y. Hilton caught a team-high 6 passes for 82 yards while Donte Moncrief hauled in 3 balls for 55 yards and Luck’s lone touchdown through the air. The defense and special teams deserved a game ball, as Jordan Todman started the game with a 99-yard kick return for a touchdown, and the defense followed suit by sacking the aforementioned Rodgers 3 times while picking him off once, although like Indianapolis, they allowed the Pack to rack up 400+ yards of total offense on the day. However, also like Tennessee, the Colts did so and ended up winning.

All the trends point towards Indianapolis, however I like how the Titans offense has found its groove in the last 6 games where Tennessee has put up at least 26 points in each of those games. Plus, they have to be riding the momentum from their blowout win of the Packers and will be hungry to avenge the loss to these same Colts just 4 weeks ago.

Give me Tennessee and the points in a game I think the Titans could win outright.