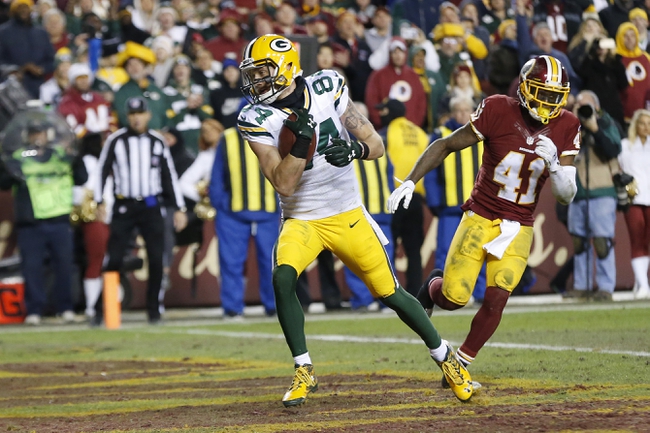 On “Sunday Night Football” in the NFL’s Week 11, we’ve got an NFC clash at FedEx Field between the Green Bay Packers and the Washington Redskins.

Green Bay is flailing right now, losing four of their last five games. The Packers’ most recent loss came at the hands of the Titans 47-25 this past Sunday. In that one, Green Bay QB Aaron Rodgers threw for 371 yards, two touchdowns and two picks, most going to Davante Adams (six catches; 156 yards) and Jordy Nelson (12 catches; 126 yards; TD).

On the season so far, Rodgers is sitting on 2410 yards, 22 touchdowns and seven picks for the Packers, and Eddie Lacy is still the team’s top rusher on 71 attempts for 360 yards. Nelson leads the way in the Green Bay receiving corps with his 50 catches for 635 yards and eight touchdowns.

Over on the Redskins’ side, they’re entering play here with a 5-3-1 record, but have only won one of their last three games. That Washington victory came this past Sunday against the Vikings 26-20. Redskins QB Kirk Cousins came away with 262 yards and two touchdowns in that one, while Robert Kelley was the big man on the ground with 22 carries for 97 yards.

So far this year, Cousins has 2716 yards with 14 touchdowns and seven interceptions for the Redskins, and Matt Jones leads the way on the ground with 99 attempts for 460 yards. Jamison Crowder is Washington’s top receiver with his 44 catches for 535 yards and five touchdowns.

It’s hard pointing at any one thing making Green Bay struggle lately, but the fact is that they’ve been putting up points fairly consistently in their last handful of games. The Packers have scored at least 25 points in their last four games straight, and that includes at least two winnable games in that mix which didn’t pan out. I may be foolish here, but the Packers simply have too much talent on their team to continue this run of futility. I’ll take Green Bay to cover (and get the victory) here and get some of that winning mojo back.