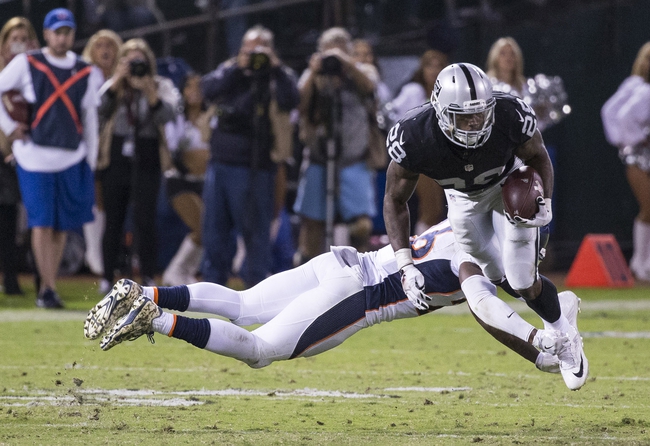 A pair of playoff hopefuls go head-to-head when the Oakland Raiders host the Houston Texans to close out week 11 on Monday night football.

The Houston Texans improved to 6-3 after narrowly edging out the Jacksonville Jaguars by a final score of 24-21. Brock Osweiler failed to put up 100 yards passing for the first time this year as he racked up just 99 yards while completing 14 of his 27 pass attempts on the day. The plus side however, is that Osweiler threw a pair touchdowns in the process. Lamar Miller led the Texans ground attack with 83 yards on 15 carries while Alfred Blue followed suit with 52 yards on 8 carries. DeAndre Hopkins led the Texans with a team-high 5 receptions for 48 yards while C.J. Fiedorowicz caught 3 balls for 26 yards. The Texans defense was able to help the team pull out the win despite the letdown from the offense as they picked off Jags QB Blake Bortles and returned it for a touchdown to open the scoring thanks to Kareem Jackson. D.J. Reader and John Simon put their stamp on the game by each recording a sack on Bortles.

The Oakland Raiders had a bye week in week 10, but in week 9, they shook up the AFC West by defeating the Denver Broncos by a final score of 30-20 to vault into the top of the division with a 7-2 record. Derek Carr had a relatively quiet outing by his standards, as he racked up just 184 yards on 20 of 31 passing while being sacked twice on the day. The game ball for Oakland had to go to Latavius Murray, who piled up 114 yards and 3 touchdowns on 20 carries in easily his best game of the season. Jalen Richard did his best to follow behind with 8 carries for 62 yards. Amari Cooper led the Raiders with 6 catches for 56 yards, while Seth Roberts hauled in 3 balls for 32 yards on the night. After Roberts, no other Raider caught more than 2 passes on the night.

The Raiders stifled the Broncos offense, holding Denver to just 299 yards of total offense and just 33 yards combined from Denver's running backs who looked like they were really missing C.J. Anderson. The Raiders forced Trevor Siemian into a couple of miscues, like being sacked twice in the game by Khalil Mack and being picked off by Reggie Nelson in what was Oakland's biggest game so far this season.

I've said it before and I'll say it again. The Raiders are for real. They come into this game with extra rest and get to face a Houston team that struggles to move the ball.

Oakland by a touchdown is the play here.

The pick in this article is the opinion of the writer, not a Sports Chat Place site consensus.
Previous Pick
Dallas Cowboys vs. Baltimore Ravens - 11/20/16 NFL Pick, Odds, and Prediction
Next Pick
NFL Week 11 2016 Picks, Previews, Odds, Schedule, and TV Info