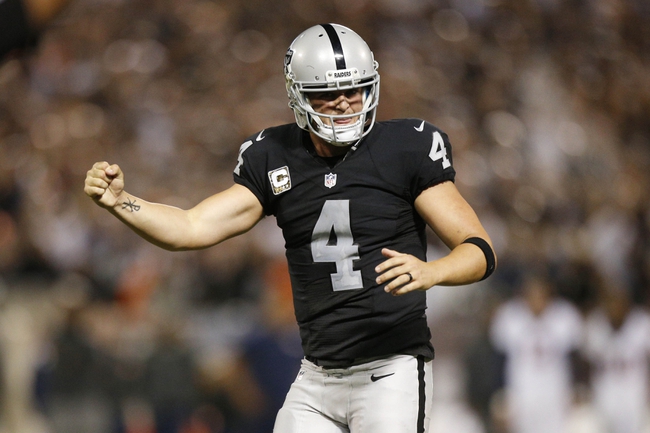 The Houston Texans and Oakland Raiders square off in a NFL showdown Monday night at Estadio Azteca on ESPN.

The Houston Texans look for back-to-back road victories to build on their AFC South division lead. The Houston Texans have split their last 10 road games. Brock Osweiler is completing 58.6 percent of his passes for 1,818 yards, 11 touchdowns and nine interceptions. Osweiler has two touchdown passes in three of his last six games. DeAndre Hopkins and Will Fuller V have combined for 854 receiving yards and five touchdowns while C.J. Fiedorowicz has 29 receptions. The Houston Texans ground game is averaging 121.4 yards per contest, and Lamar Miller leads the way with 720 yards and two touchdowns. Defensively, Houston is allowing 20.9 points and 317.4 yards per game. Benardrick McKinney leads the Houston Texans with 80 tackles, John Simon has 3.5 sacks and Kareem Jackson has four pass deflections.

The Oakland Raiders look to build on their three-game winning streak and their lead in the AFC West. Four of the Oakland Raiders last five losses have come at home, but this obviously isn’t a true home game. Derek Carr is completing 66.1 percent of his passes for 2,505 yards, 17 touchdowns and three interceptions. Carr has one or less touchdown passes in seven of his last 11 games. Amari Cooper and Michael Crabtree have combined for 1,439 receiving yards and eight touchdowns while Seth Roberts has 25 receptions. The Oakland Raiders ground game is averaging 127.8 yards per contest, and Latavius Murray leads the way with 393 yards and eight touchdowns. Defensively, Oakland is allowing 24.8 points and 398 yards per game. Malcolm Smith leads the Oakland Raiders with 49 tackles, Khalil Mack has seven sacks and Reggie Nelson has three interceptions.

The Houston Texans simply aren't a good football team and are at their worst when they go on the road. The Texans also usually crap the bed when playing in primetime/big games. The Oakland Raiders are rolling offensively and the whole team has had an extra week to prepare for this game. This is one of those Monday night games that could get ugly due to Carr and Oakland's ability to score quickly and often, while Osweiler and that Texans offense continues to struggle. Oakland by a touchdown on Monday night is more than reasonable.

The pick in this article is the opinion of the writer, not a Sports Chat Place site consensus.
Previous Pick
Dallas Cowboys vs. Baltimore Ravens - 11/20/16 NFL Pick, Odds, and Prediction
Next Pick
NFL Week 11 2016 Picks, Previews, Odds, Schedule, and TV Info