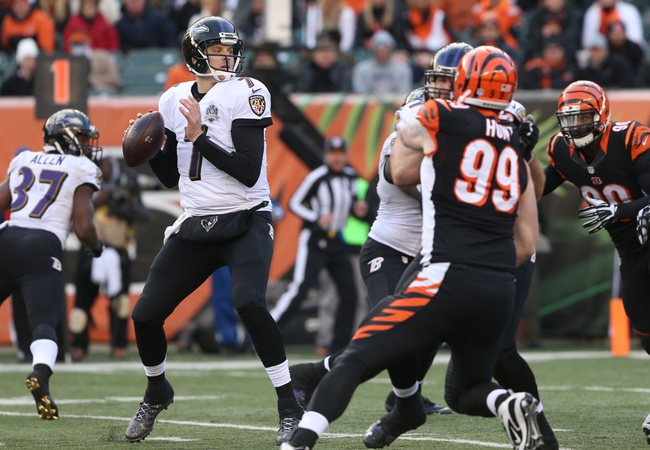 The Baltimore Ravens and the Cincinnati Bengals face off on Sunday in a week 12 NFL battle of AFC North teams.

The Baltimore Ravens are 5-5 this season and that is good enough for first place in the AFC North. The Ravens offense is averaging 19.9 points and 336.5 yards per game but they are plus 3 in turnover ratio. Baltimore QB Joe Flacco has completed 62.8 percent of his passes for 10 touchdowns and 9 interceptions. Terrence West is the Ravens top rusher with 552 yards and 4 touchdowns and Dennis Pitta is the top pass catcher with 49 receptions and Mike Wallace has 48 catches and 4 touchdowns. The Baltimore defense is allowing a 5th best in the NFL 18.7 points and a 2nd best in the NFL 295.1 yards allowed per game with 11 interceptions, 7 fumble recoveries, and 23 sacks. Zach Orr leads the Ravens in tackles with 88, Eric Weddle has 51 tackles, and Terrell Suggs has 6 sacks. The Ravens have been far from perfect but given the nature of the NFC North they control their own playoff destiny.

The Cincinnati Bengals are 3-6-1 this season and they have been hit hard by the injury bug. The Bengals offense is averaging 19.9 points and 372.7 yards per game and they have a plus 2 turnover ratio. Cincinnati QB Andy Dalton has completed 64.7 percent of his passes with 11 touchdowns and 6 interceptions and he has been sacked 29 times. Jeremy Hill is the Bengals top rusher with 623 yards and 6 touchdowns and with A.J. Green and Giovanni Bernard both out Brandon LaFell and Tyler Boyd are the top remaining pass catchers with 33 receptions each. The Bengals defense is allowing 22.6 points and 372.1 yards per game with 10 interceptions, 5 fumble recoveries, and 19 sacks. Karlos Dansby is Cincinnati’s leading tackler with 67, Vontaze Burfict has 63 tackles, and Carlos Dunlap has 5.5 sacks. This simply isn’t the same Bengals team we have seen go to the playoffs every year recently and they should get some help in the offseason in the draft and free agency.

The Bengals are banged up but that doesn’t mean they don’t show up as this one is going to be tight so the points could factor and we are going to be glad we have them as the game winds down.