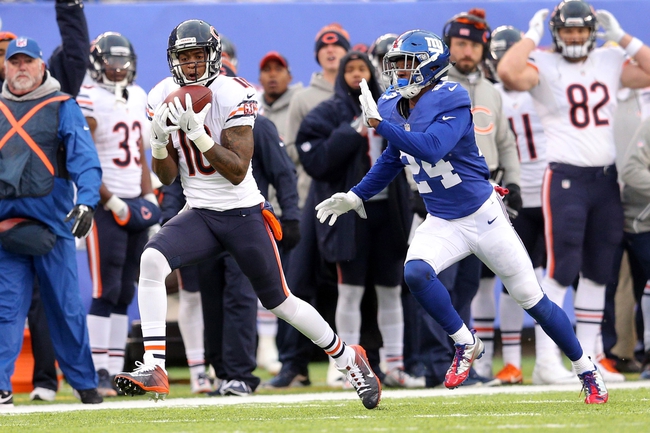 The Chicago Bears and the Tennessee Titans face off on Sunday at Soldier Field in week 12 NFL action.

The Chicago Bears are 2-8 this season and they have lost 5 of their last 6 games. The Bears offense is averaging a 31st ranked 15.7 points per game and 344.1 yards per game and they are minus 6 in turnover ratio. With Jay Cutler out Chicago will start Matt Barkley who has completed 40 percent of his passes with no touchdowns and 2 interceptions. Jordan Howard is the Bears top rusher with 682 yards and 2 touchdowns and Zach Miller leads in receptions with 47 and 4 touchdowns. The Chicago defense is allowing 23.7 points and 340 yards per game with 5 interceptions, 9 fumble recoveries, and 24 sacks. With Jerrell Freeman suspended Danny Trevathan is the top tackler with 61 and Adrian Amos and Harold Jones-Quartey each have 49 tackles. The Bears have been one of the worst teams in the NFL this season and will likely be going under a full rebuilding process.

The Tennessee Titans are 5-6 this season and are coming off of a loss to Indianapolis that could have some negative effects on their playoff hopes. The Titans offense is riding the 3rd ranked rushing attack in the NFL to averaging 25.5 points and 382.9 yards per game and they have a minus 2 turnover ratio. Tennessee QB Marcus Mariota has completed 64.2 percent of his passes with 23 touchdowns and 8 interceptions and he has rushed for 2 touchdowns. DeMarco Murray leads the Titans rushing attack with 1000 yards and 8 touchdowns and he also has 40 receptions and 3 receiving touchdowns while Delanie Walker is the top receiver with 46 receptions and 5 touchdowns and Rishard Matthews has 45 catches and 6 touchdowns. The Tennessee defense is allowing 25 points and 358.3 yards per game with 9 interceptions and 30 sacks. Avery Williamson is the Titans top tackler with 80, Jason McCourty has 56 tackles, and Brian Orakpo has 9 sacks. The Titans have yet to recover a fumble this season.

The Bears are awful and Matt Barkley makes them even worse and look for the Titans to get the road win and cover here.