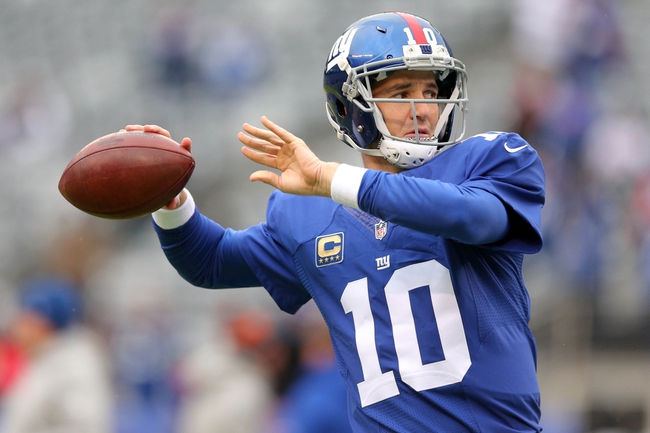 Over at FirstEnergy Stadium on Sunday, November 27, the New York Giants will be visiting the Cleveland Browns in NFL Week 12 action.

The Giants are entering play here with a 7-3 record on the year and have won their last five straight—including a 22-16 win over the Bears this past Sunday. In that one, New York was down 18-9 at the half but outscored Chicago 13-0 in the third and held on for the victory. Giants QB Eli Manning would finish 21-of-36 for 227 yards and two scores.

So far this season, Manning has 2708 yards with 17 touchdowns and 10 picks, while Rashad Jennings leads the Giants in rushing with 100 attempts for 340 yards and two scores. Odell Beckham Jr. is tops in the New York receiving game with 819 yards and six touchdowns on 59 receptions.

Then we have the lowly and hapless Browns, who have lost every game this year for an 0-11 drought. Cleveland’s latest defeat came at the hands of division-mates Pittsburgh this past Sunday in a 24-9 affair. In that one, Cleveland allowed 146 yards and a touchdown to Steelers RB LeVeon Bell, which was a microcosm of their afternoon.

On the year for Cleveland, Cody Kessler is the top QB on 1369 yards, six touchdowns and two picks, while Isaiah Crowell leads the RBs on 129 attempts for 561 yards and five scores. Terrell Pryor has been pretty good at WR, leading the team on 56 catches for 724 yards and four touchdowns.

Up until fairly recently, the Browns were at least somewhat consistent in putting up points—they were still losing, but they were scoring. That’s changed over the last three weeks, though, as Cleveland hasn’t put up more than 10 points in any of their last trio of outings. Some consistency at the QB slot would help, but with Cody Kessler going down and RG3 not ready, we’ll be seeing Josh McCown this weekend. This Giants team has been getting into close games this year, but this won’t be one of them. Give me New York.