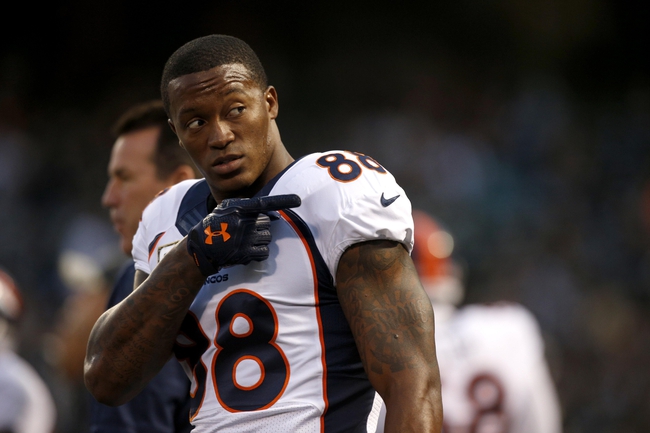 Coming up on “Sunday Night Football” in Week 12 NFL action from Sports Authority Field, the Kansas City Chiefs will be meeting up with the Denver Broncos.

Kansas City comes into this game with a 7-3 record on the year. The Chiefs had a nice five-game win streak going, but that came to an end with a 19-17 defeat against Tampa Bay in Week 11. In that one, the Chiefs allowed 331 passing yards and a touchdown to Bucs QB Jameis Winston.

So far this year for Kansas City, QB Alex Smith leads the offense on 2077 yards, nine touchdowns and four picks, while Spencer Ware is the top rusher with 132 attempts for 641 yards and two TDs. TE Travis Kielce is the top receiver for the Chiefs on 574 yards, three touchdowns and 49 receptions.

Over on the Broncos side, they’re also coming in with a 7-3 record. Denver has won three of their last four, and that includes a 25-23 win over New Orleans a couple of Sundays ago. During that game, Denver blocked a potentially tie-breaking extra point by the Saints, then ran it back the other way for two points and an improbable victory.

On the season thus far, QB Trevor Siemian has 2028 yards with 12 TDs and seven picks, while CJ Anderson is Denver’s top rusher with 110 carries for 437 yards and four scores. Demaryius Thomas is the Broncos’ top receiver with 55 catches for 678 yards and five touchdowns.

This is one of those “throw the records out the window” rivalry games, but in this particular year, both the Broncos and the Chiefs are very solid teams. If all goes according to plan, this should be a defensive battle with the first team to 20 points getting the win. Considering Kansas City hasn’t reached 20 points in two of their last three games, I’m leaning toward Denver at home. The Broncos offense isn’t anything special either, but should buoy Denver toward a win.