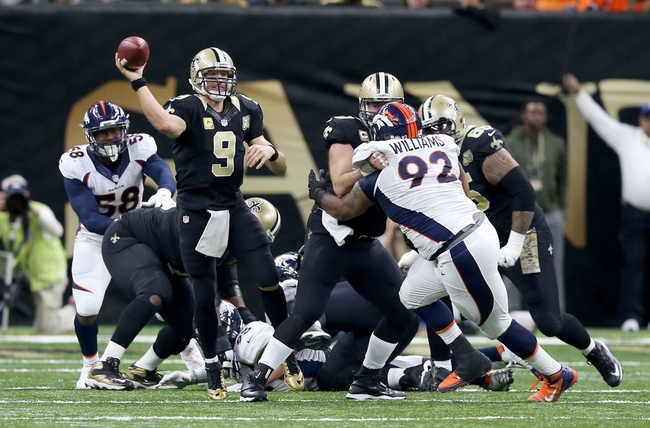 The New Orleans Saints and the Los Angeles Rams face off on Sunday in The Superdome in Week 12 NFL action.

The New Orleans Saints are 4-6 this season and they have lost their last two games by a combined 5 points. The Saints offense is averaging a 3rd best in the NFL 28.5 points per game and a best in the NFL 422 yards per game and they are net zero in the turnover department. New Orleans QB Drew Brees has completed 71 percent of his passes with 26 touchdowns and 8 interceptions and he has been sacked 16 times. Mark Ingram is the Saints top rusher with 575 yards and 2 touchdowns and rookie Michael Thomas is the top receiver with 56 receptions and 5 touchdowns and Brandin Cooks has 51 catches and 6 touchdowns. The Saints defense hasn’t gotten the job done as they are allowing a 30th ranked 28.6 points per game and a 27th ranked 382.8 yards per game with 6 interceptions, 8 fumble recoveries, and 19 sacks. Craig Robertson is the Saints leading tackler with 90, Kenny Vaccaro has 58 tackles, and Nick Fairley has 4.5 sacks. The Saints are going to need to string some wins together if they hope to make the playoffs but they really have some holes to fill as far as personnel and the overall roster.

The Los Angeles Rams are 4-6 this season and have lost 5 of their last 6 games as they have gone to the youth movement. The Rams offense is averaging a 32nd ranked 14.9 points per game and a 31st ranked 299.9 yards per game and they have a minus 3 turnover ratio. Jared Goof has taken over at QB for L.A. and in his debut against Miami he completed 54.8 percent of his passes for 134 yards with no touchdowns or interceptions. Todd Gurley is the Rams top rusher with 591 yards and 4 touchdowns but he is averaging just 3.2 yards per carry while Kenny Britt is the top receiver with 49 catches and 3 touchdowns and Tavon Austin has 40 catches and 2 touchdowns. The Rams defense is allowing a 6th ranked 18.7 points per game and 318.3 yards per game with 6 interceptions, 8 fumble recoveries, and 20 sacks. Alec Ogletree is the Rams top tackler with 86, Mark Barron has 77 tackles and 2 interceptions, and Aaron Donald has 5 sacks. The Rams defense is one of the best and their offense is the worst and they are the main reason the Rams have a losing record.

While defense wins championships, this is far from a championship game and the NFL has become an offensive game. With the Saints at home and able to move the ball better they are my play here as I don’t see Goff as a future or current star and is more likely a bust.