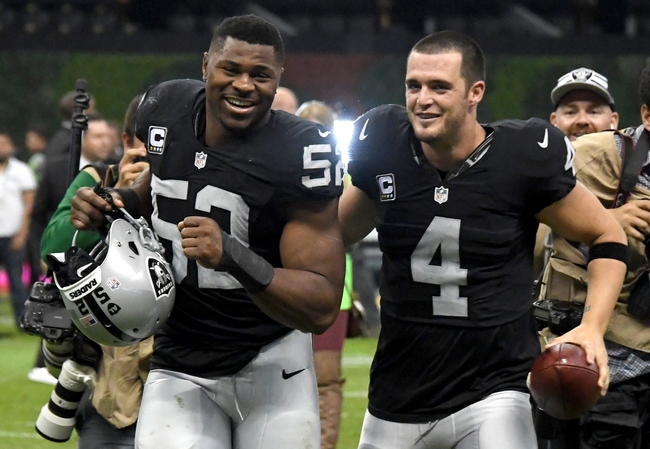 The Carolina Panthers and Oakland Raiders clash late Sunday afternoon in a NFL showdown at the Oakland Coliseum.

The Carolina Panthers look to stay hot after winning three of their last four games to remain in the NFC playoff picture. The Carolina Panthers have lost four of their last five road games. Cam Newton is completing 56.5 percent of his passes for 2,186 yards, 11 touchdowns and seven interceptions. Newton has one or less touchdown pass in four straight games. Greg Olsen and Kelvin Benjamin have combined for more than 1,428 receiving yards and seven touchdowns while Ted Ginn Jr. has 32 receptions. The Carolina Panthers ground game is averaging 107.5 yards per contest, and Jonathan Stewart leads the way with 365 yards and five touchdowns. Defensively, Carolina is allowing 24.6 points and 353.5 yards per game. Luke Kuechly leads the Carolina Panthers with 102 tackles, Mario Addison has 6.5 sacks and Thomas Davis has two interceptions.

The Oakland Raiders look to win their fifth straight game to build their lead in the AFC West. The Oakland Raiders have won four of their last six home games. Derek Carr is completing 66.2 percent of his passes for 2,800 yards, 20 touchdowns and four interceptions. Carr has two or more touchdown passes in five of his last 10 games. Amari Cooper and Michael Crabtree have combined for more than 1,501 receiving yards and nine touchdowns while Seth Roberts has 26 receptions. The Oakland Raiders ground game is averaging 118 yards per contest, and Latavius Murray leads the way with 426 yards and eight touchdowns. Defensively, Oakland is allowing 24.3 points and 393.6 yards per game. Malcolm Smith leads the Oakland Raiders with 59 tackles, Khalil Mack has eight sacks and Reggie Nelson has three interceptions.

The Carolina Panthers have quietly gotten their season back on track with three wins in their last four tries. However, the Panthers have yet to prove they can get the job done on the road, as their only road victory this season was a three-point victory over the lousy Los Angeles Rams. The Oakland Raiders are on fire right now and have the offense to torch a Carolina defense that will likely be without its leader in Kuechly. Even with the extra rest for Carolina, the Oakland Raiders should win this game.