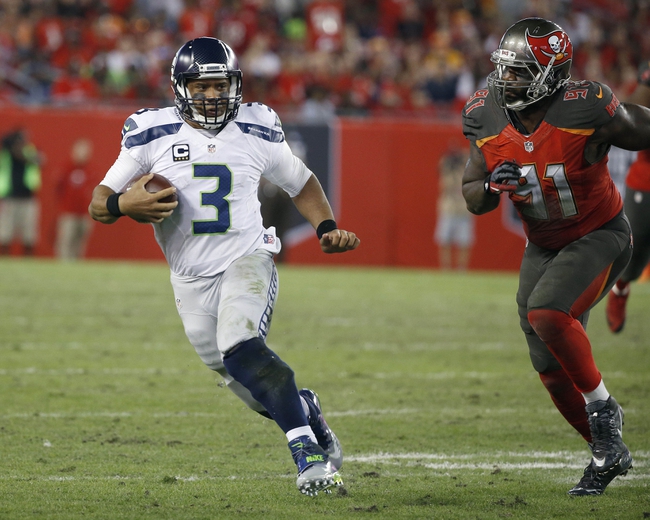 The Carolina Panthers look to keep their slim playoff hopes alive with a date against the Seattle Seahawks at CenturyLink Field in week 13’s edition of Sunday Night Football.

The Carolina Panthers had a massive blow dealt to their playoff hopes after a heartbreaking 35-32 loss to the Oakland Raiders sent Carolina to 4-7 on the year. What’s even more sad for the Panthers is that they rallied from a 24-7 halftime deficit to actually take a 32-24 lead in the 4th before Oakland scored 11 straight to steal the win. Cam Newton connected on just 14 of his 29 pass attempts for 246 yards, a pair of touchdowns and an interception while being sacked twice on the afternoon. Jonathan Stewart racked up 96 yards and a pair of touchdowns on 17 carries to lead the Panthers ground attack while Ted Ginn Jr. put up team-highs with 4 catches for 115 yards and an 88-yard catch and run for a touchdown. Greg Olsen also caught 4 passes for 45 yards while Kelvin Benjamin hauled in a pair of passes for 53 yards and Newton’s other passing touchdown on the day. Defensively, the Panthers “slowed down” the Oakland offense by allowing one of the Raiders’ lowest totals this season of 366 yards in total offense while picking off Derek Carr courtesy of a Thomas Davis interception.

The Seattle Seahawks had arguably the most disappointing week 12 performance after falling to Tampa Bay by a final score of 14-5. Russell Wilson completed 17 of 33 passes for just 151 yards and a pair of interceptions while being sacked a whopping total of 6 times on the day. However Wilson did lead the team with 80 yards on 8 carries while Thomas Rawls came up somewhat ineffective after putting up just 38 yards on 12 carries. Jimmy Graham led the Seahawks with 67 yards receiving although Graham did put the ball on the ground by way of a fumble forced by Lavonte David that the Bucs returned 53 yards the other way. Doug Baldwin pulled down a team-high 7 catches for 34 yards in the loss. After Graham and Baldwin, no other Seahawk caught more than a single pass in the game. Defensively it was a hard game for Seattle as their offense couldn’t get anything going, resulting in long stretches of their defense being on the field. And even when Seattle’s defense was on the field, they offered little resistance as Jameis Winston completed all but 7 of his 28 pass attempts and were unable to bring Winston down by way of a sack in the loss.

Carolina is slowly starting to see their playoff hopes fading, and going to Seattle to face an angry Seahawks team after last week’s brutal performance is not a recipe for success. However, I thought Seattle would come out firing against the Bucs last week and put up a stinker so until they show me they’re back on track, I’ll back the over which has hit in each of the last 5 meetings in Seattle.