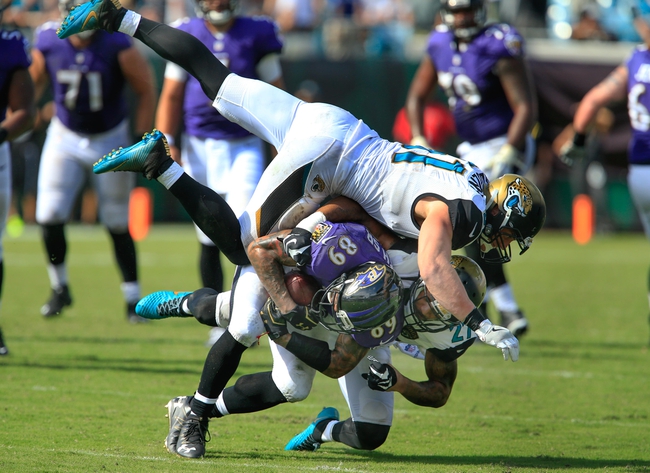 The Jacksonville Jaguars and the Denver Broncos face off on Sunday in week 13 NFL action.

The Jacksonville Jaguars are 2-9 this season and they are clearly one of the worst teams in the NFL this season. The Jaguars offense is averaging a 26th ranked 19.5 points per game and a 23rd ranked 334.2 yards per game and they are a dreadful minus 15 in turnover ratio. Jacksonville QB Blake Bortles has completed 59.6 percent of his passes with 20 touchdowns and 13 interceptions. Chris Ivory is the Jaguars top rusher with 350 yards and 2 touchdowns and Allen Robinson is the top receiver with 53 receptions and 6 touchdowns and Marquise Lee has 46 receptions and 2 touchdowns. The Jacksonville defense is allowing a 27th ranked 26.6 points per game and a 6th ranked 320.9 yards per game with 3 interceptions, 6 fumble recoveries, and 24 sacks. Paul Posluszny is the Jags leading tackler with 91, Telvin Smith has 88 tackles, and Yannick Ngakoue has 6 sacks. The Jaguars defense isn’t bad as we can see by their yards allowed but the inconsistency on offense has hung them out to dry.

The Denver Broncos are 7-4 this season but that is only good enough for 3rd place in the AFC West. The Broncos offense is averaging 24.2 points and 337.4 yards per game and they have a plus 4 turnover ratio. Denver QB Trevor Siemian has completed 60 percent of his passes 15 touchdowns and 7 interceptions. Devontae Booker has taken over the Broncos rushing attack with 475 yards and 2 touchdowns and Emmanuel Sanders is the top receiver with 61 catches and 4 touchdowns and Demaryius Thomas has 60 catches and 5 touchdowns. Defensively the Broncos are allowing a ninth ranked 19.9 points per game and a 4th ranked 313.9 yards per game with 10 interceptions, 8 fumble recoveries, and 35 sacks. T.J. Ward leads the Broncos defense with 69 tackles, Von Miller has 12.5 sacks, and Aqib Talib and Darian Stewart have 3 interceptions each. The Broncos are going to have to play well down the stretch to make the playoffs in a crowded AFC.

The defenses are clearly the better units o both of these teams but I see Denver making a lot less mistakes and given the Broncos pass rush look for the Jags to turn the ball over plenty and lose badly.