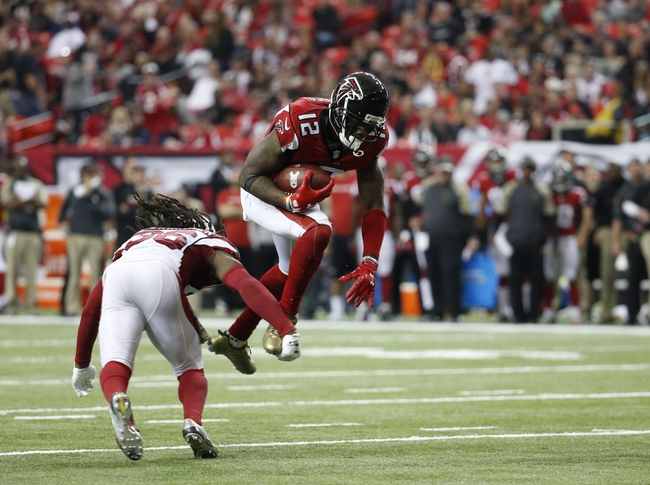 The Kansas City Chiefs head to the Georgia Dome to take on the Atlanta Falcons in week 13 NFL action.

The Kansas City Chiefs used a Cairo Santos field goal at the end of the extra period to improve to 8-3 with a 30-27 overtime victory over the Denver Broncos, thus leapfrogging the Chiefs ahead of Denver into 2nd place in the highly competitive AFC West. Alex Smith completed 26 of his 44 pass attempts for 220 yards and a touchdown. Spencer Ware led the Chiefs ground attack with 64 yards on 17 carries, however it was Tyreek Hill who made the biggest impact accounting for both of the Chiefs offensive touchdowns. Travis Kelce led KC with 101 yards on 8 receptions, while the aforementioned Hill caught a team-high 9 passes for 52 yards including the 3-yard receiving score. The game ball for the Chiefs should go to the defense and special teams, which accounted for Kansas City's first 9 points by way of a safety and a kick return touchdown that ensued on the following kickoff. Denver did rack up 464 yards of total offense, however the Chiefs did get to Broncos QB Trevor Siemian 5 times including 3 from Justin Houston who also forced a fumble off of Siemian that the Chiefs were unable to fall on top of.

The Atlanta Falcons hit the ground running and never looked back as they throttled the Arizona Cardinals 38-19 to improve to 7-4 on the year. Matt Ryan connected on 26 of his 34 pass attempts for 269 yards, a pair of touchdowns and an interception. Devonta Freeman led the Falcons rushing attack with 60 yards and a pair of touchdowns on 16 carries. Taylor Gabriel racked up a team-high 75 yards and 2 touchdowns on 4 receptions while Mohamed Sanu hauled in 8 receptions to lead the team in that category for 65 yards. Defensively, Atlanta did all they could but even in victory, their defensive shortcomings were exposed. The Falcons did a pretty good job at stopping Cardinals running back David Johnson on the ground, holding him to just 58 rushing yards on 13 carries, his 3rd-lowest total since week 2. However, Johnson ended up catching 8 balls out of the backfield for 103 yards and a touchdown. On the plus side, Atlanta did get to Arizona QB Carson Palmer 3 times while picking him off thanks to a De’Vondre Campbell interception.

Atlanta is a hard place to go on the road and win, but Atlanta’s defense is far worse than the Denver defense that just allowed 30 points to the Chiefs. Atlanta’s offense has been on point lately as well, which is why I’ll back the over, as it has hit in each of the last 4 meetings.