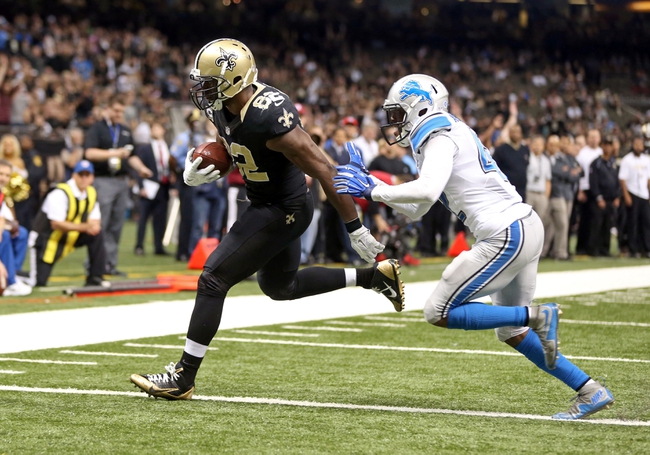 The New Orleans Saints and the Detroit Lions face off on Sunday in a week 13 NFL battle of two of the top statistical QB’s in football.

The New Orleans Saints are 5-6 this season and that is good enough for 3rd place in the AFC South. The Saints offense has gotten it done as they are averaging a 2nd best in the NFL 30.4 points per game and they are averaging a NFL best 434.1 yards per game and they are plus 1 in turnover ratio. New Orleans QB is just piling on his Hall of Fame resume completing 70.1 percent of his passes with 30 touchdowns and 8 interceptions. Mark Ingram has added some punch to the Saints backfield gaining 731 yards on the ground scoring 3 rushing touchdowns and adding 30 receptions with 4 receiveing touchdowns while Michael Thomas has 65 receptions and 7 touchdowns and Brandin Cooks and Willie Snead have 51 receptions each. While the Saints offense has prospered, the defense hasn’t as they are allowing a 30th ranked 27.9 points per game and a 26th ranked 370.5 yards per game with 7 interceptions, 9 fumble recoveries and 22 sacks. Craig Robertson is the Saints leading tackler with 96, Kenny Vaccaro has 62 tackles, and Cameron Jordan has 5 sacks. If the Saints defense could just be average and middle of the pack the Saints would be one of the most feared teams in football.

The Detroit Lions are 7-4 this season and that is good enough for 1st place in the NFC North as they look to get back to the playoffs. The Lions offense is averaging a 22nd ranked 22.5 points per game and a 26th ranked 329.5 yards per game and they are plus 3 in turnover ratio. Detroit QB Matthew Stafford has completed 66.8 percent of his passes with 19 touchdowns and 5 interceptions. Lions running back Theo Riddick has gained 355 yards and scored a touchdown in a revolving door situation caused by a ton of injuries and he has 48 receptions with 4 receiving touchdowns while Golden Tate has 57 catches and 2 touchdowns and Anquan Boldin has 48 catches and 6 touchdowns. The Lions defense ranks 15th in both yards allowed per game at 353.5 and points allowed per game at 21.6 and they have 7 interceptions, 8 fumble recoveries, and 20 sacks. Tahir Whitehead leads the Lions with 101 tackles, Tavon Wilson has 56 tackles, and Kerry Hyder has 7 sacks. The NFC North has turned up somewhat soft this season and the Lions have taken advantage of it.

This should be a fun game to watch and I see it coming right down to the end so I will take the Lions with the points as they might come into play.