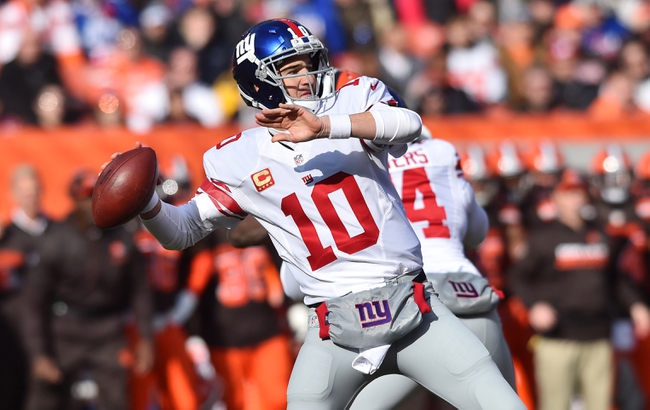 The New York Giants head to Pittsburgh to take on the Steelers in a pivotal inter-conference matchup in week 13 NFL action.

The New York Giants won their 6th straight by defeating the winless Browns by a final score of 27-13. Eli Manning completed just 15 of his 27 pass attempts on the day for 194 yards and 3 touchdowns while being sacked just once in the entire game. Rashad Jennings led the G-men with 55 ground yards on 15 carries while Paul  Perkins racked up 29 yards on his 9 carries. Odell Beckham Jr. found himself as the only Giants receiver with more than 2 catches as OBJ pulled down 6 balls for 96 yards and a pair of touchdowns. Defensively, the Giants were all over the Browns, sacking Cleveland QB Josh McCown a total of 7 times on the day, including a pair from Olivier Vernon and 3 sacks from Jason Pierre-Paul, who also forced a fumble off of Browns RB Isaiah Crowell and returned it 44 yards for a touchdown.

The Pittsburgh Steelers won their 2nd straight by defeating a Andrew Luck-less Indianapolis Colts squad by a score of 28-7 to improve to 6-5 on the year. Ben Roethlisberger completed 14 of his 20 pass attempts for 221 yards and 3 touchdowns on the night, all of which went to Antonio Brown who led the Steelers with 5 catches for 91 yards to go along with the hat trick of touchdown grabs. LeVeon Bell rounded out the scoring for the Steelers by racking up 120 yards on 23 carries, including a 5-yard touchdown that opened the scoring for Pittsburgh early in the first quarter. The Steelers defense got after Indy and backup QB Scott Tolzien, sacking him a total of 3 times and turning Tolzien over twice thanks to a pair of interceptions from Mike Mitchell and William Gay.

The word is that it is going to be extremely cold in Pittsburgh for the game, which normally lends itself to a tight, grind it out, ground and pound style of game, which is why instead of picking a side, I’ll take the under in what I think will be a low scoring game.